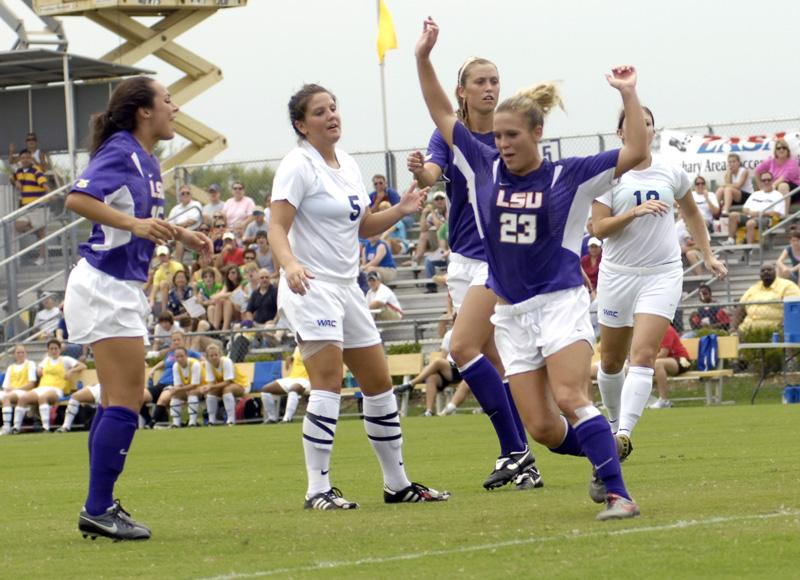 BATON ROUGE — The LSU soccer team has gotten off to a fast start in 2007 as it extended its unbeaten streak to four games with a 2-0 shutout of in-state rival Louisiana Tech on Sunday at the LSU Soccer Complex in the final game of the LSU Classic.

This is the first time that the two schools have squared off on the soccer field as the Tigers (2-0-0) and Lady Techsters (0-2-0) took the field in front of the fifth largest crowd in stadium history with 935 fans and a statewide audience watching live on Cox Sports Television.

LSU owns a four-game unbeaten streak dating back to last season when it battled the 12th-ranked Florida Gators to a 1-1 tie on Oct. 22 followed by a 1-0 shutout of SEC West rival Arkansas on Oct. 27. It opened the 2007 season with a 3-0 shutout of Southern Miss on Friday.

“Sundays are always tougher physically, and it looked like we were a little leg weary today,” said LSU head coach Brian Lee. “Obviously the only way to get into game shape is by playing games. I thought it was a good first weekend for our team for the most part, but there are still some kinks that need to be worked out as we move forward.”

Sophomore midfielder Melissa Clarke picked up right where she left off on Friday by putting the Tigers on top 1-0 in the early going with her second goal of the season in the seventh minute.

Clarke took a pass on the left wing and beat a Louisiana Tech defender to the end line before reversing her field and curling a brilliant strike over the defense and into the net from the left side of the penalty area. The shot hit the far post and bounced into the back of the net at the 6:26 mark.

The Norcross, Ga., native has gotten off to a fast start in 2007 after missing the final 14 games of last season with a torn lateral collateral ligament in her right knee. For her effort, she was named the Offensive Most Valuable Player of the LSU Classic with a pair of goals on the weekend.

“We still have a ways to go, but I’m happy with our start to the season. I can tell that the team is starting to develop chemistry out there,” Clarke said. “It was important for me to get off to a fast start considering what I went through. It’s going to take a little getting used to playing a lot of minutes again, but the knee feels really good so far.”

Junior forward Roslyn Jones pushed the LSU advantage to 2-0 just minutes later with her first goal of the season in the 17th minute of the first half, following a blast off the crossbar by Taryne Boudreau with a header into the back of the net from inside the six-yard box.

Senior goalkeeper Valerie Vogler only needed to save two shots by the Lady Techsters to earn her third straight shutout dating back to last season and eighth of her career. In fact, Vogler has not allowed an opponent to score a goal in her last 302:08 between the posts.

“Val has been solid in goal for us, and her experience is going to be a key to our success this season,” Lee said. “She hasn’t really been tested in the run of play yet this year because I think she only needed to save two shots this weekend. That is sure to change this weekend because Memphis and Miami will put more pressure on our defense.”

The Tigers return to the pitch on Thursday at 5 p.m. CDT as they travel to Birmingham, Ala., to take on the Memphis Tigers in the first game of the Samford Bulldog Classic. They follow with a tough match against the regionally ranked Miami Hurricanes on Saturday at 5 p.m.