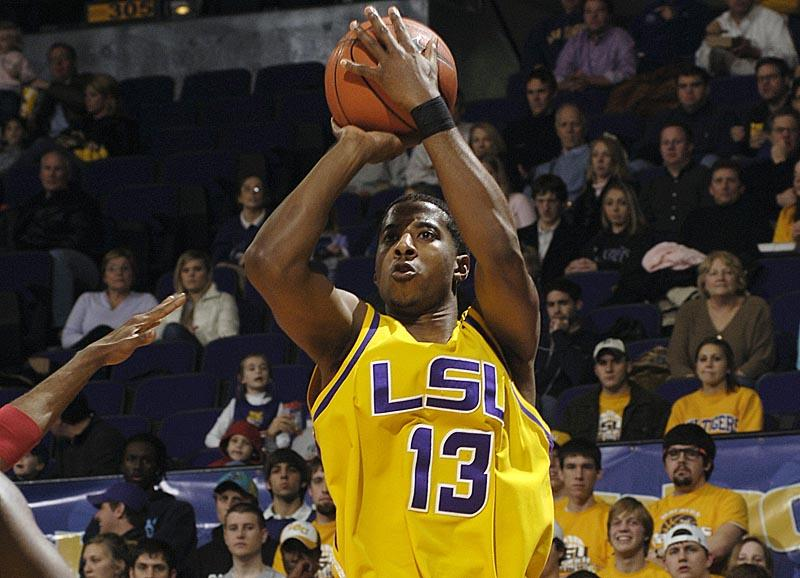 GUELPH, Ontario, Canada — The LSU Tigers held Guelph University without a field goal for over 10 minutes of the second half to break open game one of the men’s basketball teams exhibition tour of the Toronto area with a 92-60 win over the Gryphons Saturday night at the Mitchell Athletic Centre on the Guelph campus.

The Tigers will play game two Sunday afternoon at 2 p.m. CDT against York University in a game that will be broadcast for free in the Geaux Zone of LSUsports.net. The Voice of the Tigers Jim Hawthorne and Senior Associate Sports Information Director Kent Lowe will have the call beginning at 1:55 p.m.  There is no charge for the broadcast and there will be no over the air broadcast of the game.

Baton Rouge junior college transfer Marcus Thornton had a big night for the Tigers with 30 points, including 19 in the first half, hitting 4-of-6 three-pointers to lead five LSU players in scoring. Terry Martin added 17 and dished out five assists moving into the point guard position for Garrett Temple, who is sitting out the series rehabbing his injured left ankle. Tasmin Mitchell added 16, Dameon Mason 12 and freshman Anthony Randolph added 10.

The Gryphons had two players in double figures with Borko Popic and Michael Petrella each getting 11.

Coach John Brady saw some things he liked in the game but realized it was just a first exhibition contest to build on, the whole purpose of taking this young team to Canada.

“Overall, I thought we played hard and with some effort,” said Brady. “The thing we need to get better at and improve our technique in is defending and rebounding the ball.  Offensively, we were fine. I was really impressed with Marcus Thornton‘s first time out of the chute to get 30, Terry Martin was solid and Tasmin was solid. Our perimeter was solid. We ran Terry at the point and Tasmin and Marcus at the wings. We’ve got to do a better job of rebounding and we’ve got to do a better job of defending, but overall for the first time out with six new players and only eight practices, I thought it was a very positive thing for us to do.”

The Tigers shot 52 percent for the game, including 24-of-40 in the second half. With Marcus Thornton hitting 4-of-6 from the international arc (20-6) and Mitchell hitting both his attempts, LSU was 7-of-12 from the three-point line, something LSU will be hoping to improve on from last season.

Brady also had praise for Randolph, who played 28 minutes off the bench in his first effort in the college environment, also adding two blocks and two steals to his stat line.

“It was a nice game for Anthony Randolph,” said Brady. “Although we know he will get better once we have time to work on his technique. His hard play and his range and athleticism really showed up tonight and I’m really looking forward to really coaching him as we move along in the season.”

Mitchell scored LSU’s first four points of the game and with Marcus Thornton scoring seven straight points, the Tigers forced Guelph to call time out with LSU up, 15-4, at the 13:28 mark. LSU opened the lead to 14 points twice in the half, before the Gryphons made their best run of the game, scoring the last four points of the half to cut the LSU margin to 39-33 at the intermission in the game being played by NCAA rules with the exception of a 30 second shot clock and the international three-point line.

After Mason scored the opening points of the second half on a designed play off the half inbounds, Guelph came up with two more baskets to cut the LSU lead to 41-37 with 18:24 to play in the game, exciting the several hundred fans in the Mitchell Centre.

But LSU then picked up the offensive speed, shut down the Guelph attach and held the Gryphons without a field goal over the next 10 minutes in upping the lead from four to 30, 77-47.

Without Temple playing, it was Martin and Bo Spencer playing the point, the Tigers only turned the ball over 10 times with Spencer getting two assists and no turnovers in his 10 minutes of play.

“We need Garrett on the court for some leadership and to stabilize some things on the court, but I thought Terry for the first time he’s ever played it exclusively I thought he did some nice things for us and Bo came off the bench and did some nice things for us so it was a nice experience with only eight practices to be able to play a 40-minute game.”

Mitchell was happy to be able to get on the court in some game action in preparation for his junior year.

“It was great to play. It was great to see some of the new guys touch the ball and shoot the ball,” said the Denham Springs junior. “It’s giving us the chance to all jell into one. We played a little better defense in the second half. We showed some more poise and we got our second wind. We’ve got to work some more on our defense and keeping the other team from getting so many offensive rebounds. But it was good to get out there and we now will get ready for (Sunday).”

After Sunday’s game with York, the Tigers conclude the trip with a 10 a.m. game at the home of the Varsity Blues, the University of Toronto.