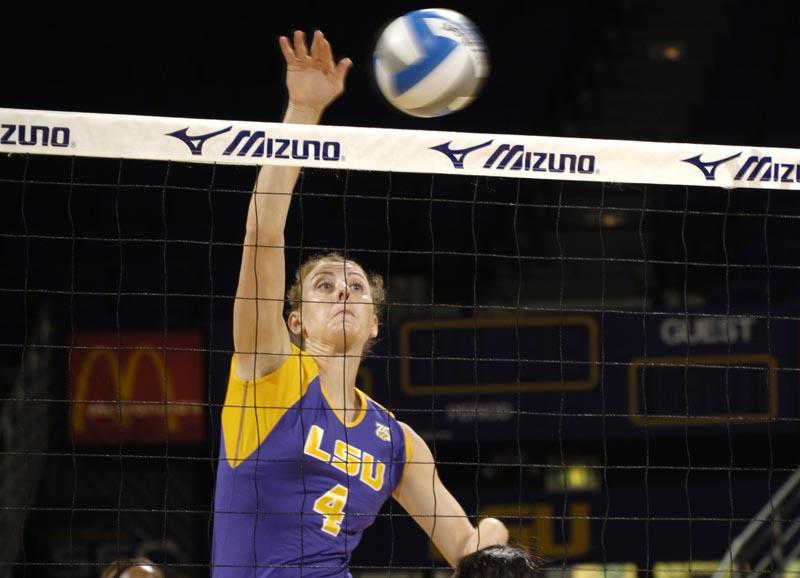 With the wins, the Tiger remain undefeated and improve to 6-0 on the year after also claiming the Mizuno Tiger Classic last weekend. The Islanders dropped to 2-3, while the Owls fell to 2-4. Lauren DeGirolamo was named the tournament’s Most Valuable Player, while Kyna Washington and Brittnee Cooper were named to the all-tournament team. It marked the second-straight MVP honor for DeGirolamo and the second all-tournament team for Cooper.

“It was another great weekend playing against three teams that forced us to adjust to three very different styles of play,” said LSU head coach Fran Flory. “With Rice being the toughest match of the weekend, they challenged our hitters and our offense to step up to the next level. They backed us down in part o the match, but we fought back. I’m proud of the way we came back.

Against Rice, libero Elena Martinez recorded 30 digs, which tied for the second-most digs in any match in LSU history. It also marked the second most digs in a four-game match by a Tiger. The last time an LSU player posted 30 digs was Luciana Reis with a school-record 31 against Kansas on Dec. 4, 1993.

In back-to-back matches, DeGirolamo tied her career high with 17 kills against Texas A&M-Corpus Christi and Rice. Against the Islanders, she also hit a team-best .531 with seven blocks and six digs. With her 12 blocks and 17 kills against the Owls, it marked her third career double-double.

“Lauren and Kyna did an exceptional job,” said Flory. “I thought Maggie and Brittney did a nice job running the offense. This was a nice step for our team. We look forward to getting back into the gym and making progress next week.”

Martinez was one dig away from her third-straight match with 20 digs against Rice, finishing with a match-best 19 despite playing at outside hitter over the final game. In addition, Brittney Johnson was the team’s setter for the entire match and posted 38 assists. Tania Schatow recorded her second action this season with four kills and three blocks. Haley Reuther saw her first collegiate action, recording a kill, three digs and three blocks.

Against Texas A&M-Corpus Christi, the Tigers played with several freshmen to gain valuable experience and earned a hard-fought game one win. DeGirolamo led LSU with seven kills, while Washington posted six. While neither team was efficient with the Tigers hitting .125 and the Islanders at .094, LSU out killed TAMUCC, 16-7.

Battling back and forth throughout the game, the teams were tied on 10 occasions, with three lead changes. With the score tied at 19, the Tigers made a final push that proved to be enough. Holding match point at 29-22, however, the Islanders scored four straight before a kill by Washington ended the game, 30-26.

In the second game, LSU showed much improvement, hitting .257 with 14 kills and four blocks, while holding Corpus Christi to nine kills, no blocks and a .000 hitting percentage. With the score tied at three, the Tigers went on a 7-1 run that put them ahead, 10-4. The Islanders got back to within four, 10-6, but could get no closer the rest of the way. LSU led by as many as 11, 27-16, before going to the locker room leading by two games, 30-20.

The Tigers pulled ahead, 11-7, to start the third game. Texas A&M-Corpus Christi pulled to within one, 12-11, but tough serving by Michelle Hensgens helped LSU go on a three-point run to stretch the lead to 15-11. A five-point swing later in the match by the Islanders cut a six-point advantage to just two, 20-18. The Tigers would not let Corpus Christi get any closer as LSU scored 10 of the final 16 points, including back-to-back assisted blocks by DeGirolamo, to end the match, 30-24.

LSU led by four early on, 5-1, but the Owls came back to tie it up at five. The pair went through 12 tied scores and five lead changes in the game. The Tigers were two points from the game win, 28-26, but Rice scored three straight to earn its first game point, 29-28. A ball handling error by the Owls tied it up again, but back-to-back kills by Rice evened the match, 31-29.

With the score remaining close through the first part of game four, the Tigers fell behind by five after a five-point run, 9-4. LSU tied it up at 12 and after four more ties, took the lead for good, 17-16. The Tigers dominated the final part of the game, scoring 13 of the final 16 points to win the game and the match, 30-20.

The Tigers return to action on the road next weekend. LSU will participate in the Iowa Challenge in Des Moines, Iowa. The Tigers will take on Iowa State next Friday at 5 p.m., before facing host Drake on Saturday at 10 a.m. and Iowa at 5 p.m. LSU’s next home match is Sept. 21 against South Carolina in the Maravich Center at 7 p.m.