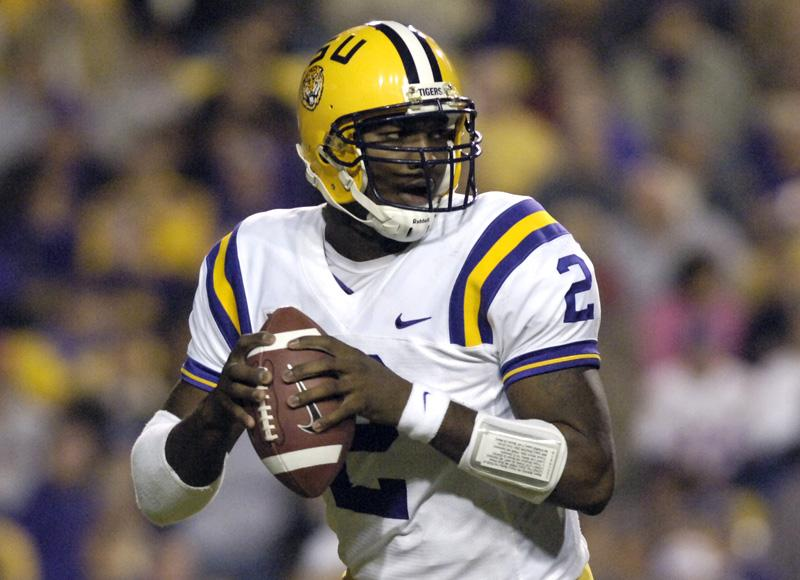 BATON ROUGE — Quarterback JaMarcus Russell, who has guided the Tigers to a 10-2 overall mark and a berth in the Allstate Sugar Bowl, was named the recipient of the Charles McClendon Most Valuable Player Award for the 2006 season at the teams’ annual football banquet on Sunday night.

Russell, who was named first-team All-Southeastern Conference this year, has tossed 26 touchdown passes, while throwing for 2,797 yards in 2006. Russell has a 24-4 overall mark as LSU’s starting quarterback and he ranks No. 2 in school history in career TD passes with 50.

This year, Russell led the SEC and ranked No. 3 in the nation in pass efficiency with a 168.1 rating after completing 211-of-308 passes. Russell will lead the fourth-ranked Tigers into the Sugar Bowl against No. 11 Notre Dame on Jan. 3 in New Orleans.

The MVP award for Russell highlighted an evening that also saw the Mobile, Ala., native be named as LSU’s permanent offensive captain. Joining Russell as permanent team captains for the 2006 Tigers include LaRon Landry on defense and Chris Jackson on special teams.

Other top awards handed out on Sunday had wide receiver Dwayne Bowe and defensive tackle Glenn Dorsey presented with the Percy E. Roberts Award, which goes to the most valuable offensive and defensive player.

Bowe, a third-team All-America this year, leads the Tigers with 60 receptions for 912 yards and a school-record tying 11 touchdowns. For his career, Bowe has hauled in a school-record 25 TD passes.

Dorsey, a first-team All-America by several publications, was the anchor for a Tiger defense that ranked No. 2 in the nation in yards allowed (238.8) and No. 4 nationally in scoring (12.5 points per game). Dorsey, who was twice named SEC Defensive Lineman of the Week, had 59 tackles, 8.5 tackles for losses and three sacks for the Tigers.

Landry, also a first-team All-America pick, was named the winner of the George M Wallace Memorial Award after leading the Tigers with 68 tackles during the 2006 season.

The Jeff Boss Unsung Hero Award was given to four Tigers ? wide receiver Craig Davis, running back Jacob Hester, defensive end Chase Pittman and defensive lineman Ryan Willis. The Jeff Boss Unsung Hero Award is given annually to the players who make a significant contribution to the success of the team without much recognition, much like that of the late LSU equipment manager.

The Alvin Roy Strength and Conditioning Award, which is given annually to the player with the most dedication to strength training, was presented to senior offensive tackle Peter Dyakowski.

Justin Vincent, one of LSU’s career leaders in rushing yards, was named the winner of the Butch Duhe Award for outstanding character and unmatched contributions to the Tiger football team.

LSU’s senior linebacker Jason Spadoni and junior defensive back Craig Steltz were both presented with the LSU Wild Tiger Special Teams Award after they combined to accumulate the most points on special teams play during the season.