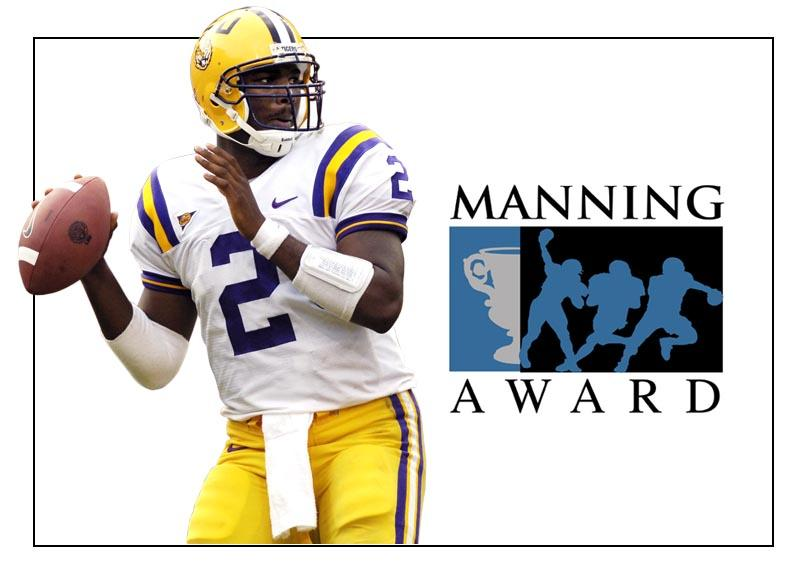 BATON ROUGE — LSU quarterback JaMarcus Russell has been named as one of 11 finalists for the Manning Award, the Sugar Bowl announced on Wednesday.

The Manning Award is presented to the nation’s best college quarterback by the Sugar Bowl.

This year, Russell has guided the Tigers to a 9-2 overall mark and a No. 8 national ranking. Russell has completed 197 of 286 passes for 2,587 yards and 24 touchdowns. He has twice led the Tigers to touchdowns with less than 15 seconds left to win games, including last week against Ole Miss when LSU scored with 14 seconds remaining to force overtime.

The Manning Award was created in honor of the college football accomplishments of Archie, Peyton and Eli Manning and will be presented to the recipient following the holiday bowl season. It is the only quarterback award which takes into consideration the candidates bowl performances.

The winner will be determined by a select panel of national media covering college football, as well as each of the Mannings.

“Each of these student – athletes also provide today’s aspiring youth with a roadmap for their own success,” said Sugar Bowl CEO Paul Hoolahan. “The Sugar Bowl is most grateful to the Manning family for helping pay tribute to these young men.”

“We are proud of the accomplishments all of these outstanding quarterbacks,” said Archie Manning. “We are especially proud of how they each led their respective teams to success and an outstanding season.”

Last year’s winner of the Manning Award was Vince Young. Now in his rookie season with the Tennessee Titans, Young led his undefeated Texas team to a national championship. He completed 30 of 40 passes for 267 yards and gained 200 yards rushing against defending national champion USC in the 2006 Rose Bowl. He finished the season completing 212 of 325 passes for 3,036 yards and 26 touchdowns. He rushed for 1,050 yards. The 2004 winner was Matt Leinart.