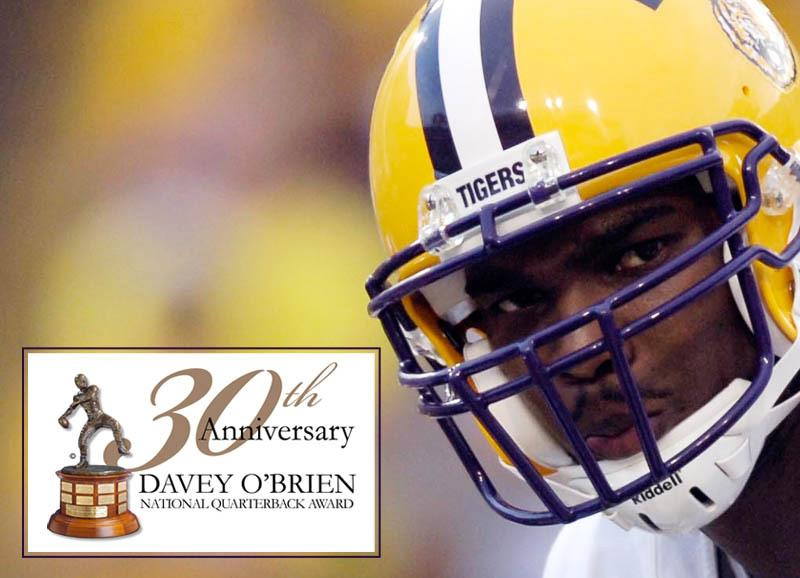 BATON ROUGE — LSU quarterback JaMarcus Russell is one of 18 players from across the nation named as a semifinalist for the coveted Davey O’Brien National Quarterback Award, the Davey O’Brien Foundation announced on Wednesday.

Russell, a junior from Mobile, Ala., has guided the Tigers to a No. 12 national ranking and a 7-2 overall mark this year. Russell is 21-4 all-time as LSU’s starting quarterback.

Russell connected with Early Doucet on the game-winner against the Vols with nine seconds left to cap a 15-play, 80-yard drive for the Tigers. The comeback victory marked the seventh time in his career that Russell has led the Tigers to a win despite trailing in the fourth quarter.

For the year, Russell has completed 159 of 229 passes for 2,157 yards and 18 touchdowns. Russell leads the SEC and ranks No. 5 in the nation in pass efficiency. Russell also leads the SEC in total offense with an average of 250 yards per game, a figure that ranks 16th in nation.

For his career, Russell ranks second in school history in TD passes with 42. He’s also No. 5 in LSU history in passing yards with 5,653 and No. 5 in completions with 420.

The O’Brien Selection Committee, made up of a nationwide panel of sportswriters, commentators and former O’Brien Award winners, will vote later this month to narrow the field again. The three finalists will be announced November 21 by the National College Football Awards Association in a joint effort among college football award programs.

The winner of the 2006 Davey O’Brien National Quarterback Award will be announced on ESPN’s Home Depot College Football Awards Show scheduled for December 7 at 7 p.m. EST.  The show will air live from the Atlantic Dance Hall on The Boardwalk at Walt Disney World in Orlando, Florida. The winner will then be honored on February 19, 2007, at the 30th annual Davey O’Brien Awards Dinner at The Fort Worth Club in downtown Fort Worth, Texas, along with Paul Hornung, recipient of the 2006 Davey O’Brien Legends Award, and the O’Brien High School Scholarship Award winner.