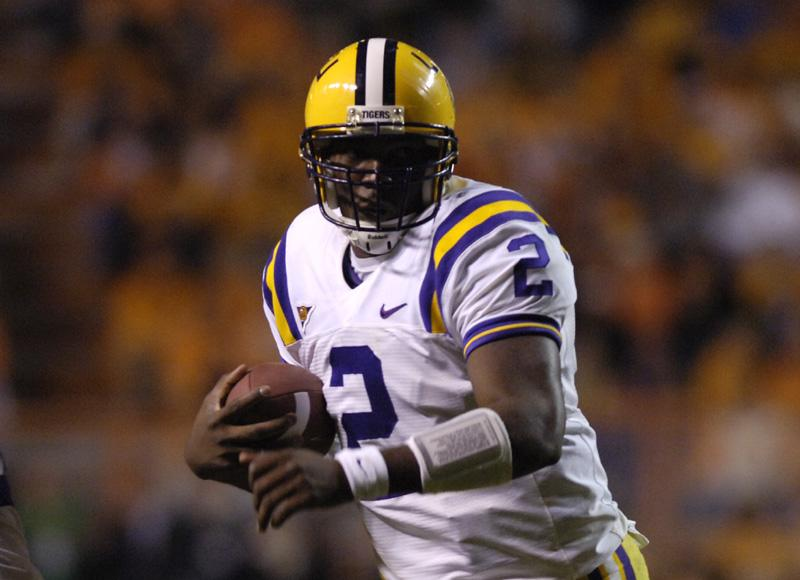 BATON ROUGE — For the third time this season, LSU quarterback JaMarcus Russell has been named the SEC’s Offensive Player of the Week for his performance in the Tigers’ 28-24 road win over No. 8 Tennessee on Saturday, the league office announced.

The three offensive player of the week honors is the most of any player in the SEC this year.

Russell earned the award after leading the Tigers on 15-play, 80-yard drive which culminated with a 4-yard TD pass to Early Doucet with nine seconds remaining in the contest that gave LSU a 28-24 victory. The game-winning drive, the seventh time in his career that he’s led the Tigers to a victory after trailing in either the fourth quarter or overtime, came just minutes after Tennessee had taken a 24-21 lead.

For the game, Russell connected on 24 of 36 passes for 247 yards and three touchdowns. Russell also rushed seven times for a career-best 71 yards, including a long run of 34 yards in the second half.

With his three TD passes, Russell moved past Herb Tyler into second place in school history in career touchdown passes with 42.

For the game, Russell engineered an LSU offense that racked up 478 yards of offense and one that controlled the ball for 41 of a possible 60 minutes. In the fourth quarter alone, the Tigers had possession of the football for 13 minutes and 38 seconds.