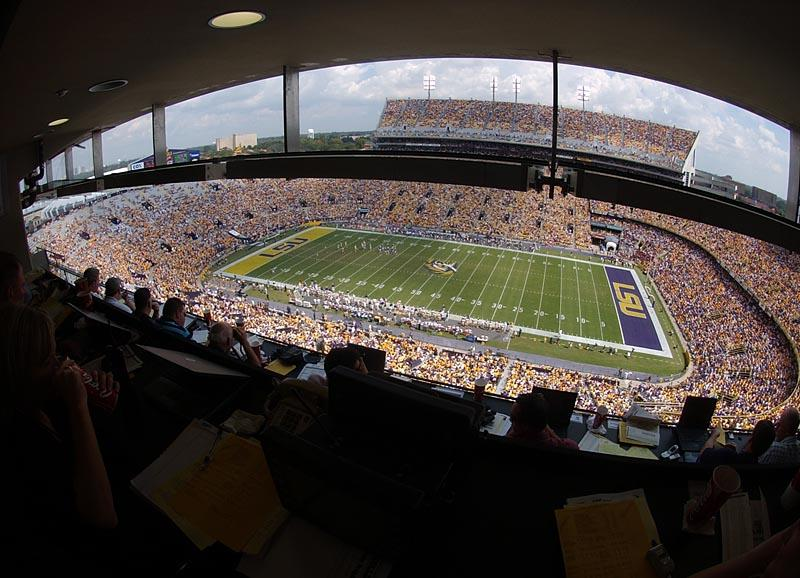 BATON ROUGE — The press box at Tiger Stadium has been named in honor of former LSU sports information director Paul Manasseh in a measure approved by the LSU Board of Supervisors on Friday.

The Paul Manasseh Press Box will be dedicated prior to LSU’s game against Alabama on November 11.

Manasseh, a pioneer in the field of sports public relations, spent more than 40 years in professional and college athletics, including 12 years as the sports information director at LSU and four as the original public relations director of the Denver Broncos.  He died in 2000 at the age of 80.

Manasseh was a pacesetter in the field of sports media relations, making LSU one of the first to utilize highlight films to publicize its sports teams.  He was recognized nationally for his work and, in 1978, was named to the College Sports Information Directors of America Hall of Fame.

Considered a master of promoting athletes for all-star honors, Manasseh spearheaded the campaigns of 13 Tigers to All-America status during his tenure at LSU.  He was once referred to as the only man who could make a second-team quarterback a first-team All-American, referring to Tiger great Bert Jones who played in a two-quarterback system at LSU in 1972.

In addition, LSU won numerous awards for its media publications during the 1970s, once claiming nine national awards in one year alone.

Manasseh was also known for tutoring numerous students who went on to successful careers in the field of sports journalism and media relations.

Born February 25, 1920, at Shreveport, La., Manasseh graduated from Byrd High School in Shreveport, attended LSU from 1937-39 and worked for the Shreveport Journal from 1939-42 prior to entering the U.S. Army during World War II. After serving in the Army’s public information office in New Orleans, he was assigned to the Counter Intelligence Corps in Philadelphia and New York, serving in that position for three and one-half years.

After the war, Manasseh returned to the Journal briefly in 1946, following which he served as editor of the Bossier Tribune for one year before being named sports director of KWKH radio in Shreveport.  In 1950 when he was named general manager of the Monroe Sports of the Cotton States Baseball League then in 1954 he was promoted to Shreveport of the Texas League as director of public relations through 1958 when he accepted a similar post with the Denver Bears of the American Association.

After a one-year stint with the Dallas Rangers of the same Triple-A league, Manasseh returned to Denver where he served as director of press relations and general manager of the baseball team.  He was also the original director of public relations with the Denver Broncos of the American Football League from 1960-63, then was promoted to assistant general manager for the Broncos, a post he held until 1966.

Manasseh joined the Dallas Cowboys as special assistant for kicking tryout camps in 1967, a position which resulted in his being named as sports information director at Louisiana Tech in 1968.  He was named associate SID at LSU in March of 1969 and was promoted to SID in November of 1971, a position he held for a dozen years under three different athletic directors.

Following his retirement from LSU in 1983, Manasseh joined the Memphis Showboats of the United States Football League as the team’s director of public relations, but was hired by the New Orleans Breakers of the USFL prior to that team’s first game in the spring of 1984.

When the Breakers moved its operation to Portland following the 1984 season, Manasseh accepted the position of executive director of the Independence Bowl in his hometown of Shreveport.  In 1989 he retired from the Independence Bowl and returned to Baton Rouge, but stayed busy in the ensuing years as a free-lance columnist and media relations staffer with the Sugar Bowl.

Manasseh’s son, Jimmy, is an attorney in Baton Rouge and serves as the interior press box public address announcer at LSU football games.