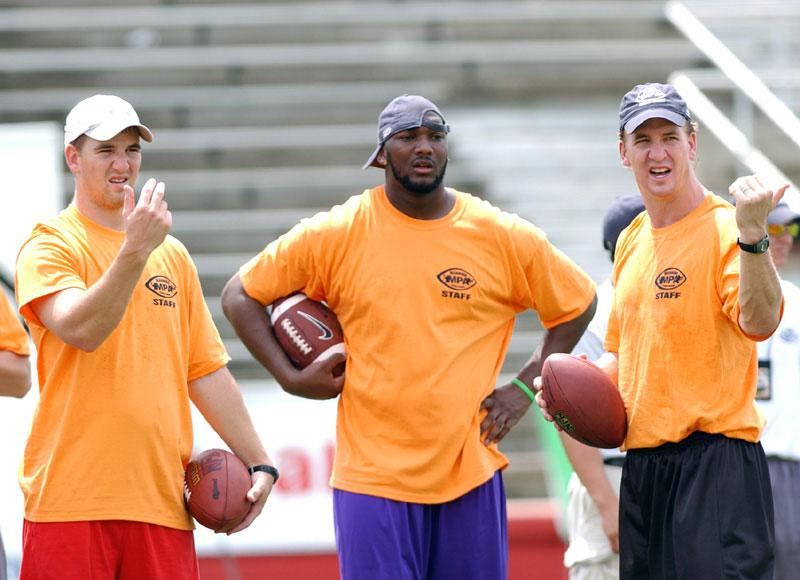 BATON ROUGE — LSU quarterback JaMarcus Russell is using this week as a learning and teaching experience as the junior signal caller is serving as a counselor at the Manning Passing Academy, which is being held at Nicholls State University.

“It’s a great experience to be down here and to take part in this event,” Russell said. “I’ve always looked up to the Manning family for what they do both on and off the field. I’m using this week as a way to share what I know as a quarterback with the kids that I’m working with, while also trying to better myself by watching Peyton and Eli.”

Nearly 1,100 high school-aged campers are taking part in the camp this week. The Manning Passing Academy, which is a football skill position camp for quarterbacks, running backs, wide receivers, and tight ends, has campers from 44 states participating this week.

“I like the interaction with the kids;” Russell said. “It’s fun to work with the campers and be able to take my skills and knowledge and help them apply it to making them better players.”

“This is a learning and growing experience for me as well. Being around Peyton and Eli, two of the best quarterbacks in the game, you watch and see how they do things and you try to take something back home with you to make you and your team better. I’m really enjoying this opportunity.”

On Saturday, Russell, along with the Peyton and Eli Manning, and other collegiate quarterbacks who are participating this week, will conduct an “Air it Out” session. “Air It Out” is the highlight of the Manning Passing Academy and features a passing and skills demonstration by NFL star quarterbacks Peyton and Eli Manning. Russell will also take part in the skills challenge.

“I’m looking forward to it,” Russell said of his chance to line up and compete alongside Peyton and Eli Manning.

After this weekend, Russell will return to the LSU campus as the Tigers head into the final three weeks of their off-season strength and conditioning program.

“The off-season program has been great,” Russell said. “Everyone is working hard and getting better. We just have to finish strong and come in to fall camp ready to go to work.”

Russell along with the rest of the Tigers report for fall camp on August 6 and they begin practice the next day. LSU opens its season on Sept. 2 against Louisiana-Lafayette in Tiger Stadium.