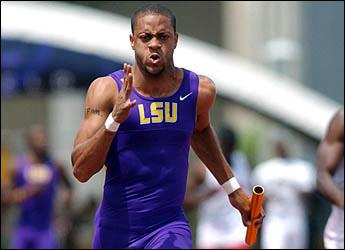 BATON ROUGE — With the field for the NCAA Track and Field Championships set, the LSU men’s and women’s teams have combined to qualify 10 athletes and four relay teams to the national meet it was announced Wednesday by the NCAA committee.

The Tigers have qualified four athletes and the Lady Tigers have advanced six competitors. Both will be represented by 4×100 and 4×400-meter relay teams.

The men’s squad will look for the majority of its scoring opportunities on the track as Olympians Bennie Brazell and Kelly Willie and freshman standout Xavier Carter highlight the Tigers’ list of competitors.

Brazell will be seeking his first ever individual NCAA title as he goes for gold in the 400-meter hurdles. A two-time NCAA runner-up in the event, Brazell enters the meet having posted the second-fastest time in the country this season (48.54).

Willie also eyes the top of the standings as he is slated to compete in the 400 meters. The 2005 SEC champion is a five-time All-American in the event (3 indoor, 2 outdoor) who finished second last year to eventual Olympic gold medalist Jeremy Wariner. The 11-time All-American has posted the third fastest time in the nation this season (44.97).

Carter, a true freshman out of Melbourne, Fla., has won both the SEC and Mideast Regional titles in the 200 meters during his inaugural campaign. He currently owns the world’s second-fastest time in the event this season, after clocking a school record and personal best 20.02 at the regional championships.

The Tigers’ lone representative in the field will be sophomore decathlete Alleyne Lett. Lett earned an automatic bid to the national championships after scoring a personal best 7,550 points at the SEC championships. An all-conference performer in the decathlon, Lett enters the meet with the field’s ninth best point total this season.

For the women, the majority of competition will also take place on the track.

Freshman Kelly Baptiste headlines the Lady Tiger squad having earned automatic berths in both the 100 and 200 meters. Baptiste, the Mideast Regional champion in the 100 meters (11.26) and the regional runner-up in the 200 (22.93), has the opportunity to put points on the board in both events as she enters the meet with top-six times in each.

Fellow freshmen Deonna Lawrence and Jessica Ohanaja will also represent the Lady Tigers at the national meet. Lawrence is set to compete in the 400 meters, while Ohanaja will test the championship waters in the 100-meter hurdles for the first time in her career.

All three will run a leg on the Lady Tigers’ 4×100-meter team. LSU enters the meet as the two-time defending champions in the event.

Also on the track will be Tanya Osbourne. The sophomore will run in the 800 meters after finishing second in the event at the Mideast Regional.

Osbourne will also run a leg on the 4×400-meter relay team that advanced to the championships with an at-large berth after posting a season-best time of 3:33.94.

In the field, the Lady Tigers will be represented by sophomore Tina Harris and freshman Andrea Linton.

Harris will compete in the long jump, an event in which she placed second at both the SEC and regional championships. A 2004 All-American in the event, Harris owns the field’s sixth-best jump this season (21-4 3/4).

Linton will be making her first ever appearance at the NCAA Championships. She earned an at-large bid in the triple jump after recording a season best distance of 41-10 3/4 at the SEC meet.

The NCAA Championships get underway Wednesday, June 8, at the Alex G. Spanos Sports Complex in Sacramento, Calif. Competition will run through Saturday, June 11.