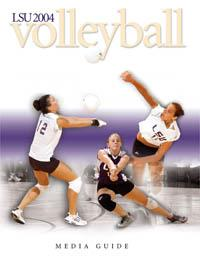 BATON ROUGE — The 2004 LSU volleyball media guide placed seventh in the nation out of 77 entries in the annual publications contest, as announced by the College Sports Information Directors of America (CoSIDA).

The 96-page guide was written, compiled and edited by Associate Sports Information Director Melissa Reynaud with design and layout by publications student assistants Krystal Bennett and Peter Hoang. Staff photographer Steve Franz provided all the pictures for the guide.

The guide is a complete source of up-to-date information on the 2004 team, as well as archived information and records from the 30 years of volleyball at LSU. The cover, mostly in white, featured action pictures of the Tigers’ 2004 seniors – Beth Cowley, Rachel Pittman and Regan Hood.

Media guides are a source of information for media outlets and fellow sports information/media relations offices, as well as a valuable recruiting tool for coaches.

Finishing second in District 6, LSU was the only Southeastern Conference school to rank nationally in the contest. The Nebraska volleyball guide finished first in the nation and was awarded best cover, followed by Texas A&M, Kansas State, Penn State, Southern Cal, Notre Dame and LSU.

The guide, along with those of all 20 varsity sports at LSU, can be seen at LSUsports.net. The awards will be presented at the CoSIDA annual convention, July 3-6, in Philadelphia.