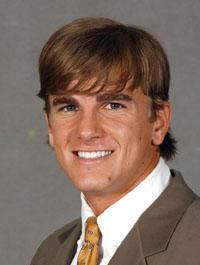 Determann, a product of Catholic High School in Baton Rouge, posted a 3.78 GPA in biology. He graduated earlier this month, and he will begin classes this fall at the LSU Medical School in New Orleans.

“This award really makes you realize that all of the hard work you have done has paid off,” said Determann, who turned 22 on Sunday. “To get recognition like that among an elite group of fellow athletes is an honor. I am proud to bring that to LSU and to show everyone else that this school is also about academics and not just athletics.”

Determann, who was selected last week as the SEC Baseball Scholar-Athlete of the Year by the league’s coaches, is 4-0 this season with a 2.00 ERA and seven saves. He has allowed just 50 hits in 54 innings while recording eight walks, 62 strikeouts and a .239 opponent batting average.

Determann has worked as LSU’s primary relief pitcher the past three seasons, recording a 3.08 ERA in 66 career appearances. He has an 18-5 career record with nine saves.

Determann is the first LSU player to earn Academic All-America recognition since the late Wally Pontiff Jr. was honored in 2002.

The Academic All-America Teams program honors 816 male and female student-athletes annually who have succeeded at the highest level on the playing field and in the classroom. Individuals are selected through voting by CoSIDA (the College Sports Information Directors of America), a 2,000 member organization consisting of sports public relations professionals for colleges and universities in the United States and Canada.

To be eligible, a student-athletes must be a varsity starter or key reserve, maintain a cumulative grade point average of 3.20 on a scale of 4.00, have reached sophomore athletic and academic standings at his/her current institution and be nominated by his/her sports information director. Since the program’s inception in 1952, CoSIDA has bestowed Academic All-America honors on more than 14,000 student-athletes in Divisions I, II, III and NAIA covering all NCAA championship sports.