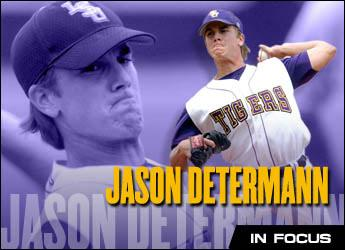 In three brilliant years, LSU pitcher Jason Determann has personified the absolute best of what a student-athlete should be. An 18-4 career record with nine saves, two College World Series appearances, a Southeastern Conference Championship and an uncanny ability to compete at the highest level when an out desperately needs to be recorded — those on-the-field endeavors pale in comparison to what the Baton Rouge native has achieved in the classroom. As Determann gears up for perhaps his final weekend at Alex Box Stadium in the 2005 Baton Rouge Regional, he reflects back on an academic and athletic career that has laid the groundwork for a future full of promise.

Academic Excellence
Determann’s academic successes were stressed by his family since his early days of grade school and later into high school at Baton Rouge’s Catholic High. His older brother, Greg, formed his scholastic foundation with 4.0 grades during his high school days. When it came Jason’s turn, he followed in his brother’s footsteps, maintaining a 3.92 GPA and receiving the honor of being named Catholic High School Man of the Year. From that, Determann will tell you that it is his competitive spirit that drives him to being the best in whatever he does.

“From the beginning my family has stressed doing well in school as well as competing on the field,” said Determann. “It is something I had always felt was a personal goal of mine. I didn’t want to be one of those that came here and left it on the field and didn’t work in the classroom. It’s that competitive nature that I just want to be good at whatever I do.”

And that spirited drive has paid off in four years at LSU. As the baseball team’s top scholar with a 3.781 GPA in biology, Determann became the first LSU player to be named to the ESPN The Magazine Academic All-America Team since the late Wally Pontiff Jr. did so in 2002. His efforts also led to the Southeastern Conference naming him the league’s Baseball Scholar Athlete of the Year on May 24. He was also nominated for the SEC’s H. Boyd McWhorter Scholar-Athlete Post-Graduate Scholarship, presented annually to the league’s top scholastic male and female achiever.

“The awards really make you realize that all of the hard work you have done has paid off,” said the junior, who turned 22 on May 29. “To get recognition like that among an elite group of other fellow athletes is an honor. I am proud to bring that to LSU and to show everyone else that this school is also about academics and not just athletics.”

While wrapping up the SEC Western Division title at Mississippi State, Determann and four other teammates were unable to take part in commencement ceremonies on campus, which capped their academic careers.

Fellow reliever and roommate Jordan Faircloth was one of those teammates who graduated. Faircloth, the recipient of the 2005 SEC Community Service Post-Graduate Scholarship, has lived with Determann for three years now, and the two share a common bond when it comes to achievement out of the bullpen and in the community.

“We have become brothers,” said Faircloth. “He and I have known that baseball is not going to be there forever. You have to try to make yourself well rounded — in the classroom and the community. You have to do those things to help others. In the long run, it will help yourself.”

Ironically, it has been the two roommates who have been the most dominant pitchers out of the Tiger bullpen this season, and both have a competitive desire to out-do the other.

“It’s a mentality that we come to have,” said Faircloth. “We expect to go out there and win. You don’t hope to win. You expect to get the job done for you and your team. It’s a battle between us that will help the team in the long run.”

Medical School
When Determann hangs up the spikes this season, it could very well be his last experience of organized baseball. His academic excellence has brought upon an opportunity to attend the LSU Medical School in New Orleans in the fall, foregoing his senior season of eligibility in 2006.

“I told myself if I got into both of those schools it would be a tough decision to make,” said Determann. “But I have decided I will be in New Orleans for the next four years.”

When completed with his academic career, the Baton Rouge native envisions himself being an orthopedic surgeon — a field he has hands-on experience with.

“I ultimately see myself being in sports medicine like Dr. Field does,” said Determann. “I have always had an interest in medicine, but the interest was really sparked when I had my surgery during my freshman year. I just find it remarkable how doctors can use all of their knowledge to allow me to pitch and be successful at it. I want to pass that on to other athletes.”

Most Valuable Player
It’s not ironic that Determann’s competitiveness in the classroom has carried onto the diamond. In 24 appearances this season, the crafty southpaw has posted a perfect 4-0 record with seven saves and a 2.00 ERA. The gaudy numbers do not clearly illustrate the ability he has to record a critical out when the game on the line, to carry the momentum of a big inning into the next or to shut down an opponent when called upon.

Determann always seems to find a way to bail LSU out of trouble when the team urgently needs someone to be that stopper — a role he has embraced over the last two seasons. He has been the most consistent Tiger pitcher over the past three seasons, and his successes in the postseason are unprecedented.

“I see myself coming into a tight ballgame up by one or two and just getting the last two or three innings to finish out the game,” Determann said. “Early on in my career, I didn’t know what my role was going to be, but last year I settled into the spot. I think that is a spot that I have gotten used to filling and other guys on the team have gotten used to me filling. They know when it is my game and I do to.”

In 2003, Determann posted a 2-0 record in LSU’s NCAA Tournament games with wins in relief versus Baylor and UNC-Wilmington. He fired three brilliant innings to close out the game against a potent Baylor lineup after starter Bo Pettit suffered a blister earlier in the game.

Despite recording an ERA of 4.14 last season, Determann was there to play his role as a holder in the postseason again. In the Tigers’ super regional opener versus Texas A&M, he recorded a win in relief of starter Nate Bumstead, working six innings of two-run ball before yielding to his roommate Jordan Faircloth.

This season, Determann is finishing off his junior campaign like one would expect. He has only allowed two earned runs in his last 17.1 innings. On April 22, LSU fell behind 7-1 at Arkansas, before responding with a furious rally that tied the game at seven apiece. It was Determann and Faircloth who carried the momentum of the comeback onto the mound. Both combined to hold the Hogs scoreless over the final four innings, including Determann who tossed the final 1.2 innings to earn the win after Nick Stavinoha’s three-run homer in the ninth.

When the game is on the line and the pressure mounts, Determann has been there in wins over Kentucky on May 6 and most notably in LSU’s clinching of the Western Division title at Mississippi State.

“It’s a matter of not folding under the pressure and not giving in,” said the junior. “A lot of guys out there lose and then end up losing their focus. It is all about the concentration factor.”

His brilliant weekend in Starkville and tense outing at UNO led him to his first career SEC Player of the Week honor. LSU looked to have suffered a non-conference defeat at the hands of UNO when Determann surrendered a leadoff triple to the Privateers in the bottom of the 10th, but he pitched around the hit and recorded three consecutive outs. Two days later, he was back out on the mound in relief again, this time winning the series opener over the Bulldogs.

And on the final day of the regular season, Determann’s stellar 2.2 innings of relief en route to his seventh save clinched the division for the Tigers, who closed the SEC season with wins in 13 of their last 17 league games.

An Influential Teammate
Determann has undoubtedly been an influence on his current teammates, but when asked to describe who has served as a role model to him during his LSU career he adamantly responded with one person — the late Wally Pontiff Jr.

Pontiff and Determann shared a similar trait of being successful in the classroom and applying to medical school and both displayed a tremendous amount of respect of how the national pastime should be played.

Whether it’s the confident swagger on the field, the leadership qualities necessary to maintain an organization or the steadfast commitment to school, few LSU baseball players within the last five years have exemplified all of these attributes like they have.

“I was fortunate to play with him for one year before he passed away,” said Determann. “Just knowing him, how he was on and off the field and how he carried that high academic standard presented him as a role model nobody else could be.”

In the 2003 Baton Rouge Super Regional Game 2 win over Baylor, it was well-documented the comment Determann made in his post-game press conference. Determann recorded the final three outs of the game to preserve a 6-5 score, but not before suffering a scare off the bat of power-hitting outfielder Chris Durbin. Durbin launched a deep one-out fly ball that looked to have been out of the ballpark when it left the bat, but the blast managed to be caught in front of the wall.

“I think it was blessing that Wally was blowing it in,” Determann later told the media in attendance.

He then recorded the final out, snaring a line drive that forced a Game 3 showdown. LSU bludgeoned the Bears 20-5 on Sunday, securing the Tigers first trip to Omaha since 2000.

Now, two years later, postseason descends upon Alex Box Stadium for the 16th straight season and dreams of another trip to Omaha are on the line as the pressure builds with every pitch and every out. But it’s pressure Determann won’t mind when he gets the call down in the outfield corner. He’s been there before, and he will be there again.