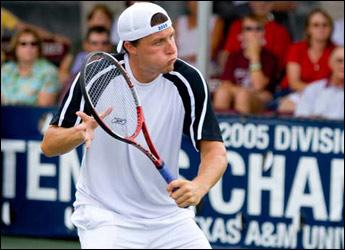 COLLEGE STATION, Texas — The LSU men’s doubles team of Mark Growcott and Ken Skupski fell to top-ranked and top-seeded John Isner and Antonio Ruiz of Georgia, 7-6 (4), 7-5, on Monday in the NCAA Doubles Championship. The doubles runner-up finish for the sixth-ranked duo is the best in LSU men’s tennis history.

Despite the loss, Growcott and Skupski end the year with the most single-season wins by an LSU doubles team with a 34-10 overall record, breaking the old mark of 31 wins set by Chad Dudley and Ryan Ideta in 1996.

Monday’s match marked the fourth time Growcott and Skupski faced the duo from Georgia this season, each resulting in a Bulldog victory. Isner and Ruiz won 9-7 at the National Indoor Championships in January, 9-8 in the regular season and 8-3 in the NCAA Round of 16 match last week. They are the only team to have beaten the LSU pair more than one time this season.

“Ken and Mark played really well, but unfortunately they were on the short end today,” said LSU head coach Jeff Brown. “It is unfortunate to see this fantastic tournament come to an end.”

The match remained close throughout with each team winning every game it served in the first set until the score evened at 6-6 in need of a first-set tiebreaker. Growcott and Skupski couldn’t overcome a 6-1 deficit in the tiebreaker and fell in the first set, 7-6 (4).

The Tigers seemed to gain the momentum in the second set when it broke serve to take a 4-3 advantage. However, Isner and Ruiz returned the favor in the next game to even the score at 4-4. Each team won its own serve until the Bulldogs broke serve in the final game to win the set, 7-5.

“We broke a serve in the second set but couldn’t take advantage of that,” Brown said. “Georgia’s a good team and they made some big shots at the end when they needed to make some big shots. It really could have gone either way because both teams were playing so well.”

Growcott and Skupski won eight of their last 10 matches to end the season with both losses coming to Isner and Ruiz. This marked the duo’s second match in the tournament against an opponent that defeated them earlier in the season. They defeated Boise State’s 11th-ranked team of Thomas Schoeck and Luke Shields in three sets, 7-6 (2), 3-6, 6-2, to advance to the quarterfinals.

The Georgia pair finished the season with 12 victories in a row and a 34-6 overall record.

Benedikt Dorsch of Baylor won the NCAA Singles Championship earlier in the day in straight sets over Pierrik Ysern of San Diego, 6-2, 7-6 (6).

LSU only manages three points in Georgia’s first four serving games, while holding off four break points in the set to stay on serve throughout set. Georgia fought off two set points in game 11, but was able to force a tiebreaker by holding in game 12. LSU’s Growcott allows two mini-breaks in the tiebreaker and Georgia takes set, 7-6 (4).

The teams each held serve through the first six games before trading breaks in games 7 and 8 to even the set at 4-4. Looking to force a tiebreaker, LSU (Skupski) is scores the first two points of game 12 but loses four straight to lose the match, 7-5.