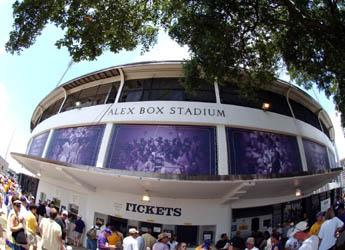 LSU will play host to an NCAA regional tournament for the 16th straight season and for the 17th time overall. The NCAA Baton Rouge Regional begins on Friday, June 3 and continues through either Sunday, June 5 or Monday, June 6.

“We’re very pleased to be selected as a host site,” said LSU coach Smoke Laval. “It’s a tribute to our players for the success they’ve enjoyed this season. I’m especially happy for our seniors, because it gives them another opportunity to play in Alex Box Stadium. This will be their fourth straight home regional, and they’ve also played in two super regionals at home. I think it’s great for them to have the chance to experience the incredible post-season atmosphere in Alex Box.”

Regional ticket booklets are $75 (gold seats), $60 (grandstand seats) and $50 (bleacher seats). All orders will include a processing fee.

Orders may also be placed in person at the LSU ticket office weekdays from 8 a.m.-5 p.m. The ticket office is located on the first floor of the LSU athletic administration building.

Payments may be made by cash, check, VISA, MasterCard or American Express.

The NCAA Division I Baseball Committee will set the entire 64-team bracket Monday through both the super regionals and the first round of the Men’s College World Series. The committee will not reseed the field after play begins. Selection of the eight super regional hosts will be announced on the ESPN Bottom Line Tuesday, June 7 at 11 a.m. Central time.

The 16 regional sites announced Sunday, with host institutions and records through Saturday, May 28, are as follows:

By virtue of being awarded a regional, nine of the host institutions also have been selected as at-large teams to the 64-team field. Arizona State, Clemson, Florida, Florida State, LSU, Long Beach State, Miami (Fla.), Tennessee and Texas have made the field as at-large selections.

Thirty Division I conferences receive an automatic berth in the field of 64, along with 34 at-large selections.