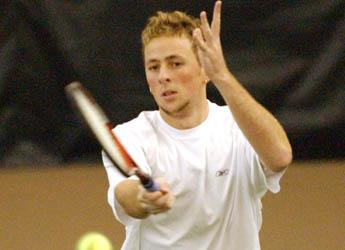 COLLEGE STATION, Texas — For the first time in Tigers history, an LSU doubles team advanced to the title match of the men’s tennis NCAA Championships when sixth-ranked Mark Growcott and Ken Skupski defeated defending national champions and No. 2-ranked KC Corkery and Sam Warburg of Stanford in straight sets, 7-6(1), 6-4.

The pair will face Georgia’s No. 1-seeded John Isner and Antonio Ruiz on Monday in the National Championship match. The singles match is set for noon with the doubles match to follow.

“It’s a real honor for these guys to make it to the national championship match,” head coach Jeff Brown commented. “They have worked really hard for this and it’s something they’ve talked about all year. They’ve had a vision, and it’s really neat to see it all coming together.”

Growcott and Skupski, a No. 5-8 seed, used their first straight-sets victory of this tournament to upend the No. 2 seed, the first higher-seeded pair they had faced. With the win, the duo now owns a 34-9 overall record for the year.

Sunday’s match remained close throughout, but the Tigers tandem managed to stay in control through two sets, avoiding the third set needed in the previous three matches.

In the first set, each pair won every game it served until the score evened at 6-all in need of a first-set tiebreaker. There Growcott and Skupski dominated, allowing only one point and claiming the first set, 7-6(1).

“We saved a break in the first game, and that ended up being huge with everyone winning on serve the rest of the set,” Brown said. “Then we got off to a quick start in the tiebreaker and had some big winners to get that first set.”

“Ken and Mark had an outstanding second set, especially in the middle where they were able to break serve and go ahead,” Brown added.

After breaking the record for wins by a doubles team at LSU in a single season with their second-round win, Growcott and Skupski made history again by becoming the first Tigers pair to advance to the championship doubles match of the NCAA Tournament. Donnie Leaycraft was the NCAA singles champion in 1989, but this is the first doubles tandem to get to the title match

The LSU and Georgia pairs have already faced each other three times this season, each resulting in a Bulldogs victory. Isner and Ruiz won 9-7 at the National Indoor Championships in January, 9-8 in the regular season and 8-3 in the NCAA Round of 16 match last week. They are the only team to have beaten the LSU pair more than one time this season.

The Bulldog duo has now won 11 consecutive matches. Their record for the year is 33-6..

Set 1: LSU 7, Standford 6
Tiebreaker: 7-1
No team was able to break serve in the first 12 games to force a tiebreaker. Stanford did not allow a break point, while LSU fought off three. LSU wins first two mini-breaks in tiebreaker to take 3-0 lead, holds serve twice for 5-0 lead. Leading 5-1 at the change, LSU breaks and earns five set points, winningthe set on the first.

LSU manages the match’s first break of serve in game 5, holds serve throughout to take match and earn berth in national final.