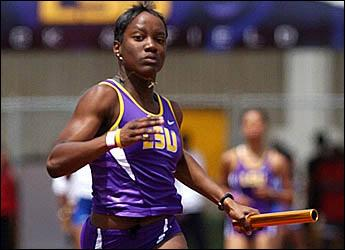 BLOOMINGTON, Ind. — The LSU men’s and women’s track and field teams capped an outstanding weekend of competition at the NCAA Mideast Regional Championships Saturday, advancing nine athletes and three relay teams to the national meet en route to securing a second-place finish in the women’s team race and a third-place showing in the men’s competition.

Tennessee captured the women’s overall title with 82 points, while Arkansas won its third consecutive men’s championship with 94.50 points. The Tigers and Lady Tigers finished with 50 and 61 points, respectively.

“They did a nice job today,” said LSU head coach Dennis Shaver. “I tried to emphasize that this meet is about being in the top five. Everyone I felt stood a chance to advance, if they performed at a high level, did.”

Topping LSU’s list of those going to the NCAA Championships were freshmen standouts Xavier Carter and Kelly Baptiste who each turned in exceptional second-day performances.

Carter added regional champion to his growing resume, capturing the 200 meter title with a blistering time of 20.02. The time, the second fastest in the world this season, also established new school, stadium and regional records in the event.

“Xavier is a great competitor and he just doesn’t like to get beat,” said Shaver.

Following the 200 meters, Carter came back to help the Tigers to a second regional title in the 4×400-meter relay. Teaming with Reginald Dardar, Bennie Brazell and Kelly Willie, the foursome keep LSU undefeated in the long relay in regional competition, securing the Tigers’ their third straight Mideast title in the event with a time of 3:03.30.

Baptiste won LSU’s other individual championship of the evening, taking the 100 meter title with a personal-best effort of 11.26. The time ranks as the 10th-fastest in Lady Tiger history, while the win gives LSU its third-consecutive regional crown in the event. Former LSU great Muna Lee won back-to-back titles in 2003 and 2004.

Baptiste then returned to the track in the 200 meters and posted her second personal record of the day, clocking 22.93 to earn runner-up honors. Baptiste missed out on her second regional title by just .02 seconds as Tennessee’s Cleo Tyson edged her in 22.91.

“Kelly didn’t run as well at the SECs so we went home, talked about it, watched some video and helped her gained focus and concentration in practice with some race modeling,” said Shaver. “This is the first time that she’s taken all that and done it in a track meet.”

In addition, Carter and Baptiste helped the men’s and women’s 4×100-meter relay teams to NCAA berths as both squads turned in season-best efforts.

The Tiger foursome of Carter, Willie, Brazell and Richard Thompson clocked the seventh-best time in school history, 38.77, but were nipped at the line by champion Arkansas who finished in 38.75.

Ohanaja then came back to the track less than 30 minutes later and earned her first ever bid to the NCAA Championships, placing third in the 100-meter hurdles with a time of 13.47.

Alleyne Lett matched Ohanaja’s effort on the men’s side, placing third in the 110-meter hurdles with a time of 13.80. The hurdles mark the second event in which the sophomore has qualified for the national meet as he earned an automatic bid in the decathlon two weeks ago at the SEC Championships.

Other national qualifiers on the track included Lady Tigers Tanya Osbourne and Deonna Lawrence as well as Tiger Bennie Brazell.

In the field, All-American Tina Harris will make her second straight appearance at the outdoor championships. She finished second in the long jump with a distance of 21-4 1/4.

The LSU track and field team wraps up the 2005 season, June 8-11, when it travels to Sacramento, Calif., for the NCAA Championships at the Alex G. Spanos Sports Complex.