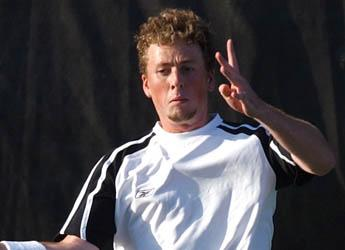 COLLEGE STATION, Texas — The No. 6-ranked LSU doubles team of Mark Growcott and Ken Skupski continued its run through the doubles portion of the men’s tennis NCAA Championships, defeating Brown’s Phil Charm and Adil Shamasdin to advance to Sunday’s semifinals with a third-straight three-set victory, 6-3, 6-7(2), 6-4.

“Ken and Mark were playing with a certain pressure today of feeling like the favorites,” head coach Jeff Brown said. “They felt as if it would be a disappointment to not get to the semifinals, so they had that pressure on them throughout their match and came through in the end.”

The duo is now 33-9 for the season, as they became just the second pair in Tigers tennis history to advance to the doubles semifinals. The other was Michael Wesbrooks and Juha Pesola in 1993, who fell in the semifinals to the eventual champions.

The Tigers will face defending doubles national champions KC Corkery and Sam Warburg of Stanford, the tournament’s second seed. It will be the first time of this tournament they play an opponent with a higher seed. Match time is set for noon.

“They’re playing the defending national champions, so this match will be a different kind of pressure,” Brown explained. “They have the pressure of playing a higher-seeded team with the opportunity to get to the finals.”

There is a bit of history in the matchup, as Warburg defeated Skupski, 7-6, 6-1, in the semifinal round of the first leg of the collegiate tennis grand slam, the ITA All-American, on Oct. 9 2004.

The Tigers continued their trend of three-set matches Saturday. In all of this tournament’s matches, they have grabbed the opening set, fallen in the second and come back to win the third and close the match.

Against the Brown duo, the first set went back and forth early, as the teams were locked at 2-all after four games. But then Growcott and Skupski put together a run to lead the set at 5-3. They won it in two more games, 6-3.

Also for the third straight match, the LSU duo fell behind to start the second set and struggled through it. They kept it close the entire way, but had to go to a tiebreaker after evening it at 6-all. The Brown pair only allowed Growcott and Skupski two tiebreaker points as they took the second set, 7-6(2).

The third set remained tight and went back and forth until the end as well. No pair led by more than one until Growcott and Skupski went from 5-4 to 6-4 to end the match.