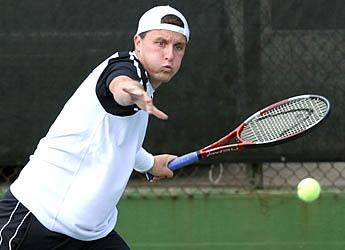 COLLEGE STATION, Texas — The sixth-ranked LSU pair of Mark Growcott and Ken Skupski used a three-set win over Boise State’s 11th-ranked Thomas Schoeck and Luke Shields, 7-6(2), 3-6, 6-2, to advance to Saturday’s quarterfinals of the doubles portion of the men’s tennis NCAA Championships on Friday.

While improving their record as a pair this season to 32-9, Growcott and Skupski also made LSU tennis history. They now hold the record for most wins in a single season by an LSU doubles team, breaking the record previously held by Chad Dudley and Ryan Ideta set in 1996.

“Ken and Mark are really putting an exclamation point on a fantastic season,” head coach Jeff Brown said of the duo. “To break the record for wins in a single season is very impressive, especially considering the talent of the guys they took it from.”

The win catapulted the pair into the tournament’s quarterfinals, where they will face Brown University’s 47th-ranked Phil Charm and Adil Shamasdin in Saturday’s noon matchup.

“They really have their minds set on tomorrow’s quarterfinal match and know they are capable of advancing,” Brown added.

The pair fell to the same Boise State opponents earlier in the year, 8-6, in a dual match at National Indoors. But they came out on the winning end this time in their second three-set victory in as many days.

Unlike the quick first set the Tigers experienced Thursday, the first set of Friday’s match went back and forth, as no pair led by more than one game in it. Growcott and Skupski went ahead 6-5, but Schoeck and Shields tied it back up at 6-all to send it to a tiebreaker.

The LSU duo swept through that, allowing their opponents only two points in the tiebreaker as they won the opening set 7-6(2).

Just as in Thursday’s match, however, the Tigers struggled in the second set, falling behind early, 4-1. They only managed two more games in the set, losing it 6-3.

But Growcott and Skupski left the struggles behind as they headed to the third set. They took an early lead and never let it go. Despite fighting back and forth in the first set and falling in the second, the Tigers tandem dominated in the decisive set, 6-2, to clinch the win to advance them to the quarterfinals.

The LSU duo, a No. 5-8 seed, is one of only three remaining seeded pairs in the tournament. The No. 1 seed from Georgia and No. 2 seed from Stanford advanced to the quarterfinals as well.