Tigers Doubles Team Advances to NCAA Round of 16 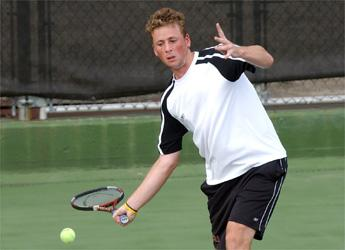 COLLEGE STATION, Texas – The LSU pair of Mark Growcott and Ken Skupski won a three-set match, 6-1, 3-6, 7-5, over Texas A&M’s Brett Joelson and Ante Matijevic in the round of 32 doubles play of the men’s tennis NCAA Championships on Thursday to advance to Friday’s round of 16.

Growcott and Skupski improved their overall record to 31-9 for the season. They handed Joelson and Matijevic just their second loss at home all year.

The LSU pair moves on to face Boise State’s 11th-ranked Thomas Schoeck and Luke Shields, whom they fell to in the ITA National Indoors, 8-6, earlier in the year.

After a three-hour rain delay, the sixth-ranked duo of Growcott and Skupski took the court and stormed to an early 3-0 first-set lead. Their Texas A&M opponents, ranked 22nd and playing on their home courts, scored next to cut it to 3-1.

But the Tigers tandem jumped right back, winning their serve and then breaking the Aggies to make it 5-1. They won the final game and claimed the first set, 6-1, in less than 30 minutes.

The pair struggled in the second set, however. Growcott and Skupski fell behind early, 3-0, and never could regain a lead. Joelson and Matijevic took the second set, 6-3.

The Tigers had serve to open the third set and took advantage of it to grab the early lead, 1-0. The Texas A&M pair did the same and evened it back at 1-all. The Aggies seized the momentum, winning the next two games as well to take a 3-1 lead in the decisive set.

But Growcott and Skupski would not go quietly. After falling behind 4-2, they won the next three games themselves to take a 5-4 lead. The Aggies pair tied it up, however, at five games each.

The Tigers team then won the final two games to win the third set, 7-5. They clinched the match by breaking Texas A&M’s serve for the seventh and final game of the last set.