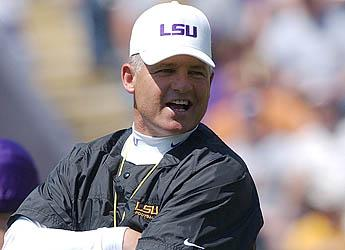 BATON ROUGE — Another national publication has tabbed LSU as one of the top 10 teams in college football heading into the 2005 season as The Sporting News has the Tigers ranked No. 6 in its preseason poll.

Earlier this week, Athlon Sports ranked the Tigers No. 9 in its preseason Top 25.

The Sporting News has also listed senior defensive tackle Kyle Williams on its first-team All-America squad and they also ranked the Ruston native as the No. 2 defensive tackle in the nation.

Other individual honors for the Tigers have junior LaRon Landry ranked as the No. 5 free safety in the nation, senior Nate Livings the No. 6 offensive guard, senior Skyler Green the No. 8 return specialist and senior Claude Wroten the No. 8 defensive tackle.

Other rankings for LSU include senior Cameron Vaughn as the nation’s ninth-best outside linebacker, junior Alley Broussard as the 11th-best running back and senior David Jones as the 14th-best tight end.

In addition to the individual rankings, The Sporting News has ranked the LSU wide receivers and the Tiger offensive line as the top units in the Southeastern Conference.

The Tigers open their first season under new head coach Les Miles on Sept. 3 against North Texas in Tiger Stadium. The Tigers return nine starters on offense and seven on defense from last year’s team that posted a 9-3 overall record and played in a January bowl game for a fourth straight season.