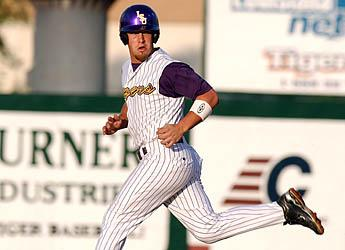 HOOVER, Ala. — Tennessee junior right-hander Luke Hochevar tossed seven innings of one-run ball on Thursday, while designated hitter Kelly Edmundson broke open a close game with a two-run homer in the seventh as the eighth-ranked Vols eliminated No. 6 LSU from the SEC Tournament by a score of 5-1 at the Hoover Met.

The Tigers (38-20) went two-and-out at the SEC Tournament for the second consecutive year and have now lost five straight games in Hoover.

The Tigers will now await an NCAA Tournament bid and a possible regional host site announcement. Regional site selections will be made at 2:30 p.m. Sunday on the ESPN2 Bottom Line. The bracket announcement takes place at 10:30 a.m. Monday and will be televised live on ESPN 2.

Tennessee (40-18) defeated LSU for the first time in SEC Tournament play. The Vols were previously 0-2 all-time against the Tigers in the tournament. Tennessee kept its tournament hopes alive and will play the loser of the South Carolina-Mississippi State game at 1:30 p.m. Friday.

Hochevar (14-2), considered to be a top-five pick in the upcoming Major League Baseball Draft, gave up one run on eight hits and struck out eight.

First baseman Blake Gill accounted for the Tigers’ only run with a solo homer in the fifth. LSU only managed three runs in both tournament games — all driven in by Gill.

For the second consecutive day, LSU fell behind early as Dirks faced first-inning troubles. Eric King greeted Dirks with a one-out single and came into score on J.P. Arencibia’s RBI double. Chase Headley followed with a single of his own and the Tigers trailed 2-0.

“When you get behind in the first and you have a guy like Luke (Hochevar) who pitched well, but he also gave us our chances to play,” said head coach Smoke Laval. “It was hard to play catch up after the first inning. After they scored, they began playing like a confident ball club behind the pitching of Luke.”

Hochevar surrendered his share of hits in the first four innings but none of them proved to be costly. Dustin Weaver was given a chance to put LSU on the board in the third, but he grounded to short with runners at the corners.

In the fourth, singles by Clay Harris and Jackson gave the Tigers another scoring chance. Hebert then ripped a shot up the middle off of Hochevar’s ankle, but the ball remained in the infield, which prevented a run from scoring.

Weaver grounded out to short for the second time and left the bases loaded.

Dirks settled down after the shaky first with scoreless frames in the second and third. The southpaw should have been out of the inning in the fourth, but a two-out error by Gill on a Jackson throw from third kept the inning alive.

Joey Andrews made the Tigers pay immediately, drilling a double to the gap to score Michael Rivera, who reached on the error.

Gill atoned for his error with his sixth homer of the season in the fifth, connecting on a two-out solo shot over the right field wall. The homer was his first since an April 12 contest versus Northwestern State at Alex Box Stadium.

“I had a good hitting count when I was at the plate and he gave me a good pitch to hit,” said Gill. “He (Hochevar) threw the ball well all day. Besides my hit, he played a great game and kept shutting us down when it counted most.”

LSU carried the momentum into the fifth after Jason Determann — in relief of Dirks — avoided a run despite a bases-loaded situation.

Quinn Stewart led off the top of the sixth with a pinch hit double, but Hochevar displayed his ability by registering three straight strikeouts to strand the runner at second.

Tiring and well over the 100-pitch mark in the seventh, Hochevar still held LSU at bay, erasing a leadoff walk before retiring the side and closing his outing.

Kelly Edmundson gave the Vols a comfortable 5-1 advantage in the seventh, tagging Determann’s offering for a two-run homer. It was only the second homer allowed by the left-hander all season.

Sean Watson finished off the game for Tennessee with two scoreless innings of relief.