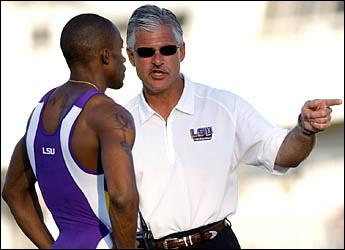 BLOOMINGTON, Ind. — A bid to the national championships will be on the line for the Tiger and Lady Tiger track and field teams as they begin competition at the NCAA Mideast Regional Championships Friday at Indiana’s Robert C. Haugh Track and Field Complex.

The two-day meet will see the top-five finishers in each event as well as the meet’s top three relay teams advance to the NCAA Championships, June 8-11, in Sacramento, Calif.

Competition will be among the toughest in the nation as the Mideast encompasses 78 men’s teams and 81 women’s teams that will all be vying for a berth to national meet.

The men’s competition contains eight squads that are listed among the nation’s top 25, including top-ranked and two-time defending regional champion, Arkansas, No. 2 Florida and the fourth-ranked Tigers.

The women’s team competition will be highlighted by No. 5 Tennessee, No. 11 Alabama and No. 21 Arkansas. The Lady Tigers enter the meet as the two-time defending team champions.

In all, the Tigers and Lady Tigers have combined to qualify 34 athletes and four relay teams into the regional championships.

Of those qualified, a pair of Tigers and three of the four relay teams enter the meet having posted the region’s top time in their respective events.

Willie, who is coming off a second straight SEC title in the open quarter, clocked a region-leading 44.97 in the event earlier this year at the Sun Angel Classic in Phoenix, Ariz. The time, the second-fastest in the NCAA and the ninth-best in the world this season, should provide the 2004 Olympian a premium seed as he sets out to defend his regional title in the event.

Brazell’s season-best time of 48.54 in the 400 hurdles tops this weekend’s field and ranks second in the NCAA and sixth in the world this year.

Willie and Brazell are also key member’s of the Tigers’ 4×100 and 4×400-meter relay teams that enter the regional championships topping the charts. The duo will team with Xavier Carter and Reginald Dardar in the 4×400 as they look to bring LSU its third straight regional title in the event.

Carter and Marvin Stevenson will round out the Tiger quartet seeking its sixth win in seven meets in the 4×100 relay.

Topping the regional performance list for the women’s squad is the 4×400 team of Brooklyn Morris, Tanya Osbourne, Meisue Francis and Deonna Lawrence. The quartet has posted a season-best time of 3:33.94.

Competition from the regional championships gets underway Friday at noon.