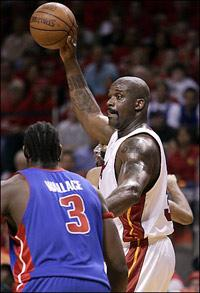 MIAMI (AP) — He’s Shaquille O’Neal, the world’s largest undercover officer. O’Neal, who is currently leading the Miami Heat against the Detroit Pistons in the Eastern Conference finals, has joined a Department of Justice task force that tracks down sexual predators who target children on the Internet.

The 7-foot-1, 325-pound center was recently sworn in as a U.S. deputy marshal and, on the Saturday afternoon before the Miami-Washington playoff series, O’Neal spent six hours with Miami Beach police investigators helping with cases.

Miami Beach Police Chief Don De Lucca says O’Neal is becoming familiar with the techniques and software the officers use to track down the predators. O’Neal spends countless hours on his home computer, logging into the police network and learning the ropes.

“I put a lot into it, and when I am done playing, I plan on going undercover and then being the sheriff or chief of police somewhere, either Miami or Orlando, I don’t know yet,” O’Neal said recently. “Everyone knows the love I have for the people who defend the streets and the people who defend our country, the armed forces, the Army, Navy, Marines. I want to do something like that, help the community.

“And I want to do it the right way, like everybody else, not just a famous figurehead that gets a job because he is a famous basketball player. I want to really learn the business.”

While playing for the Los Angeles Lakers, O’Neal went through the police academy and became a reserve officer with the L.A. Port Police. When two Los Angeles police patrol cars were burned during celebrations for the 2000 Lakers NBA title, O’Neal wrote a personal check for $42,893 to replace one of the vehicles.

During the 2000 offseason, he rode along with the Orange County Sheriff’s Office in Florida. They recovered three stolen cars and made a handful of arrests.

After being traded to Miami, O’Neal contacted Miami Beach police about becoming a reserve officer. He drops by the department regularly for one-on-one instruction, speaks to De Lucca at least once a week, and is a few training hours shy of being certified to make arrests, conduct search warrants and carry a .40-caliber pistol.

“Shaq’s interest in police work is very real,” De Lucca said. “I’ve always said law enforcement is a calling, and I believe Shaquille has been called.

“He’d be a great undercover guy. Obviously, we’re not going to send him out to buy dope, but he can do surveillance, he can do Internet crimes. He has an incredible thirst for information, he’s street-smart, and he’s a communicator and leader. I just hope it’s not my job he comes after, or I’m in trouble.”