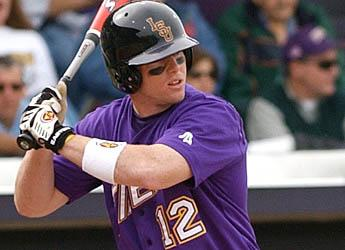 Before conference tournaments give way to the NCAA postseason next week, let’s pause to recognize the student-athletes who have been named 2005 Sports Weekly All-Americans. Tennessee pitcher Luke Hochevar and Florida State outfielder Shane Robinson are among the following group of position players and pitchers who have put together their respective seasons with equal parts grit and grace.

Jeff Clement, Jr., Southern California — Two-time U.S. National team member Clement didn’t reach the big numbers of his 21-homer, 53-RBI freshman campaign, but he has improved on his 2004 season with 11 homers, 44 RBI and a .358 average. Clement leads the Trojans in eight offensive categories. He’s dramatically improved as a defensive catcher since his first year at Southern California, with only three errors in 452 chances. He’s thrown out 20 runners in 31 steal attempts.

Second team: Caleb Moore, Sr., East Tennessee State — With a 5-for-5 performance against High Point on May 20, Moore broke the Buccaneers career hits record of 237 in style. He batted a Division I-best .455 last year before returning to post a .385 average with 20 doubles and a Southern Conference-best 14 home runs. Moore also does double-duty at closer, going 6-2 with 11 saves and a 3.03 ERA in 25 appearances.

Matt LaPorta, So., Florida — The Southeastern Conference leader with 67 RBI and 23 home runs, LaPorta has hit more than half of his homers (15) against SEC foes, including game-winning home runs in consecutive games against Vanderbilt last weekend. LaPorta is just the third player at Florida to hit 20-plus home runs, and his 23rd home run ties him with Washington Nationals outfielder Brad Wilkerson and Rockies farmhand Ryan Shealy for the most in a single season. LaPorta’s natural position is actually catcher, but depth at the position precipitated a move to first base.

Second team: Jordan Brown, Jr., Arizona — The Wildcats’ cleanup hitter leads the Pac-10 with 74 RBI. Brown also ranks among national leaders in that category. He’s batting .333 this season with 16 doubles, 12 home runs and three triples. Brown has also made just three errors at first base while starting all 53 games.

Jed Lowrie, Jr., Stanford — The reigning Pac-10 Player of the Year had another solid year by leading the Cardinal in homers (12), batting average (.323), slugging percentage (.595) walks (36) and multiple-RBI games. He made six errors in 256 chances to help the Cardinal post Division I’s second-best fielding percentage.

Second team: Chris Campbell, So., College of Charleston — The former Southern Conference Freshman of the Year leads all second basemen with 92 hits and 74 RBI. Campbell has helped the Cougars break into the Coaches’ Top 25 by hitting .387 with 19 doubles and a team-high 12 home runs for a .618 slugging percentage.

Second team: Ryan Braun, Jr., Miami (Fla.)– Two years after he burst on the scene with 17 home runs, 76 RBI and a .364 batting average as a freshman, Braun is on pace to eclipse those numbers in his third year with Miami. In addition to a .418 average, Braun has an on-base percentage of .496 courtesy of 79 hits and 30 walks. His 70 RBI lead the Atlantic Coast Conference.

Tyler Greene, Jr., Georgia Tech– The former second-round draft pick adopted the same jersey number (5) worn by past Tech shortstops Nomar Garciaparra and Victor Menocal. He honored his predecessors by posting an All-American campaign all his own. Greene, who opened the season with a broken jaw, had a strong year at the plate and in the field, hitting .361 with 11 home runs and 63 RBI. He may be just now reaching his stride with four homers in his past eight games. Greene is near-perfect on the basepaths at 28-for-29 in steals, and he’s made 13 errors in 273 chances.

Second team: Cameron Blair, Sr., Texas Tech — Blair turned down a contract offer from the Cardinals to return to school. He’s now a candidate, along with Nebraska’s Gordon, for Big 12 Player of the Year. Blair has batted .375 in conference games and led the league with a .818 slugging percentage, 10 home runs and 25 RBI in those games. He tied his own Big 12 record set last season with three grand slams among his 17 overall home runs, and he’s also 21-for-24 in stolen bases.

Ryan Patterson, Sr., LSU — Patterson, the top hitter in the Cape Cod League last summer, is on the verge of his third consecutive all-conference nod. He led the NCAA through May 15 in slugging percentage (.746) and is among conference leaders with a .379 batting average, 85 hits, 67 runs, 21 doubles, two triples and 19 home runs. He hit nine home runs in a seven-game stretch between March 12-25 and was recently named SEC Player of the Week on May 16 after going 7-for-11 to lead the Tigers to a series victory against Tennessee.

Shane Robinson, So., Florida State — No one in college baseball has had a more consistent season offensively than Robinson, who was the first player in the country to break the 100-hit plateau. He earned national attention with a 40-game hitting streak earlier this year, the eighth-longest in NCAA history and a new Florida State record. He is the first Seminoles player to record 100 hits and steal 40 bases in a single season. Entering the final three games of the regular season, Robinson ranked first in Division I in runs scored and was third with a .445 average.

Trevor Crowe, Jr., Arizona — Pac-10 Player of the Year candidate Crowe is leading the Wildcats toward a second consecutive Omaha berth, just like he did with a 7-for-14 performance to lead Arizona at the College World Series last June. Entering Arizona’s final three games, Crowe leads the Pac-10 in at least five offensive categories. Overall, he’s batting .429 with 76 runs scored, 24 doubles, a Pac-10 record 13 triples and nine homers, He has 53 RBI, a slugging percentage of .760, a .504 on-base percentage and a Pac-10 high of 23 steals.

Second team: Jacoby Ellsbury, Jr., Oregon State; Brian Pettway, Jr., Mississippi; Adam Godwin, Sr., Troy — Ellsbury has been the offensive catalyst of Oregon State’s remarkable Pac-10 title season. Through May 22, Ellsbury was hitting .415 with 17 doubles, two triples, six home runs and 42 RBI. He has only 14 strikeouts all season to go with a .504 on-base percentage into Oregon State’s final game of the year on May 25 against Portland. He’s also 21-for-29 in steals.

Pettway is a dangerous hitter with runners in scoring position. He ranked first in the SEC with a .410 batting average and third with 18 home runs. Pettway opened the season with a school-record 27-game hitting streak. He also homered in four consecutive games from May 4-8. And if that’s not all, Pettway has also pitched in 12 games, collecting four saves.

Godwin, who won three Atlantic Sun Conference Player of the Week awards this year, has 81 stolen bases, at least 20 more than anyone else in the country. The 6-1, 170-pound Godwin is the leading candidate to take Atlantic Sun Player of the Year honors.

Stephen Head, Jr., Mississippi– The first baseman/pitcher has been a standout two-way player since his freshman year. Now a junior, Head has figured prominently for Mississippi with 47 starts at first base and seven as the pitcher/DH. Offensively, Head had another huge year at the plate with 17 home runs, 12 doubles and a team-high 60 RBI, with 23 multihit games. Head made 18 appearances on the mound, including seven starts, en route to a 2.73 ERA over 69 1/3 innings. Head was unscored upon in eight of 11 relief appearances.

Second team: Mike Costanzo, Jr., P/1B, Coastal Carolina — Costanzo, the reigning Big South Player of the Year, finished the regular season batting a team-high .385 with 13 home runs and 54 RBI, with a conference-best 76 hits and .543 on-base percentage. He also led the nation with 62 walks and had a 20-game hitting streak from April 8-May 13. On the mound Costanzo has been solid, going 6-1 with a 1.71 ERA and a conference-leading 13 saves.

Luke Hochevar, Jr., Tennessee; Cesar Carrillo, So., Miami (Fla.); Dallas Buck, So., Oregon State — A highly regarded pitching prospect who could be selected within the first five major league draft picks, Hochevar led the nation through May 21 with 13 victories and hasn’t lost since an April 15 SEC matchup with Arkansas. Hochevar finished the regular season at 13-2 with a 1.93 ERA and an SEC-high 123 strikeouts in 111 2/3 innings.

Carrillo (12-1) stretched a consecutive decisions won streak all the way to 24 games over two seasons at Miami before a disastrous outing against Clemson on May 19. Despite the loss, Carrillo finished the regular season leading the ACC in almost every pitching category. In 15 starts and one relief appearance, he allowed only 85 hits and 18 walks with 106 strikeouts.

When other pitchers might be wearing down at the season’s end, Buck (11-1) is still brilliant. He outdueled fellow Roger Clemens Award semifinalist Ian Kennedy of Southern California on May 20 by allowing one hit through eight scoreless innings to match with Kennedy’s seven scoreless innings. The previous week he matched up against another Clemens semifinalist, Washington’s Tim Lincecum. Both carried no-hitters into the sixth, but it was Buck’s three-hit shutout that won the game. Buck’s only loss of the season came at the hands of Arizona, 7-5 on April 15.

Second team: Jonah Nickerson, So., Oregon State; Mike Pelfrey, Jr., Wichita State; Lance Broadway, Jr., Texas Christian– Before his last outing Sunday when he allowed nine earned runs to Southern California en route to his first loss in 15 starts, Nickerson had allowed only 12 earned runs in 82 1/3 innings for a Pac-10-low 1.31 ERA. He finished the regular season 8-1 with a 2.13 ERA and 96 strikeouts.

Pelfrey led the Missouri Valley Conference with a 1.98 ERA and 125 strikeouts. He He seemed to get stronger as the season progressed and finished the season with two shutouts among his five complete games. He allowed 26 walks over 122 2/3 innings.

Dallas Baptist transfer Lance Broadway (12-1, 1.94 ERA) paced the Horned Frogs with a Division I-leading 12 wins to go along with his 125 strikeouts and 93 innings. Broadway, who struck out 10 in a 6-0 victory against Tulane on Saturday, had a streak of 36 2/3 innings without allowing an earned run. The streak spanned seven appearances and six starts.

Neil Jamison, Sr., Long Beach State — As the closer for the staff that carries Division I’s lowest ERA according to the May 15 NCAA statistics, Jamison (4-0) has not allowed an earned run this season, which is a span of 25 2/3 innings and 11 saves. He was an eighth-round selection by the Mets in 2004.

Second team: J. Brent Cox, Jr., Texas — Following in the footsteps of former Texas reliever Huston Street, Cox (7-2, 1.86 ERA) posted his Big 12-leading 13th save of his season Saturday night when he induced a ground ball to third base with the bases loaded to preserve a 2-1 victory for No. 3 Texas over archrival Texas A&M. Cox has combined with Texas pitchers on five shutouts and he’s walked just 16 while striking out 66 in 58 innings.