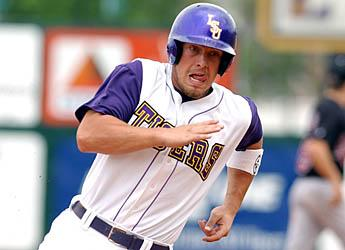 HOOVER, Ala. — Mississippi State plated four runs in the first inning against LSU left-hander Lane Mestepey and pounded out a season-high 17 hits on Wednesday to hand the sixth-ranked Tigers a 9-2 loss in the opening game of the Southeastern Conference Tournament at Hoover Metropolitan Stadium.

The Tigers (38-19) dropped their fourth straight SEC Tournament contest and are on the brink of an early elimination for the second consecutive season. LSU plays Tennessee, which lost 12-2 to South Carolina, on Thursday at 10 a.m. Head coach Smoke Laval will send sophomore left-hander Clay Dirks (10-2, 3.15) to the mound in Thursday’s game.

The Bulldogs (37-20) responded with the postseason win after losing two of three games to the Tigers to close the regular season this past weekend in Starkville. MSU faces the winner of Game 2 at 5 p.m. Thursday.

Sixteen of the Bulldogs’ 17 hits were singles, including three by catcher Thomas Berkery. Berkery went 4-for-4 with two RBI on the day and accounted for MSU’s only extra-base hit with a double in the seventh.

Mestepey (6-8) carried a great deal of SEC Tournament success into his start on Wednesday. Entering the contest, the senior had allowed just two earned runs in 27.1 career innings in five appearances in Hoover.

On Wednesday, Mestepey left after the shortest outing of his career, surrendering four runs (three earned) in 0.2 of an inning. He was tagged for six hits and did not record a strikeout.

“I just went out there, tried to get groundballs and that is what I got,” said Mestepey. “They just found the holes. I couldn’t put them away with two strikes on a lot of their hitters. Some days balls are hit right to infielders and some days they aren’t. Today was the day where they just happened to get through.”

Mestepey allowed four straight singles to start the game, including RBI hits by Berkery and Brad Jones. The southpaw looked to have minimized the damage, inducing a double play groundball from Brad Corley to record the first two outs of the frame. But Joseph Hunter dropped a single into right field to score Jones.

Derek Hebert then aided the Bulldogs , bobbling a ground ball from Joseph McCaskill, which kept the inning alive. One batter later, Jeff Butts chased Mestepey from the game with his RBI single to right.

Reliever Jordan Faircloth fanned Michael Rutledge to end the side, but not before the Bulldogs plated four runs — the most allowed by LSU in the first inning this season.

“We tried to stop the bleeding and couldn’t get it done,” said Laval. “We were on the run the whole game and they weren’t. You have to make a great play. Mississippi State refused to give in and they were better than us today. You just have to line up and play tomorrow.”

Meanwhile, MSU senior Alan Johnson (4-6) handcuffed the Tigers through the first six innings and left in the seventh after yielding two runs on seven hits in 6.2 innings. Johnson, who registered a no-decision in the Friday night opener versus LSU last weekend, walked five and struck out seven.

The Tigers were presented with a chance to cut into the lead in the third, putting runners at the corners with one out on singles by Hebert and Sprowl. Johnson then caught Ryan Patterson looking and retired Gill on a hard liner to left.

“Johnson was really good today,” said Patterson. “He hit the right spots and kept making pitches that kept getting us off balance. He kept the ball down better today than Friday. He hit his spots and changed his speeds well. He mixed in balls today that we did not see on Friday night.”

Faircloth surrendered four runs on six hits in his relief outing and was lifted in the fifth.

Staked to an 8-0 lead, Johnson cruised into the seventh before falling into trouble on singles by Hebert and Matt Liuzza and a walk to Sprowl. Gill then drove in two runs with a two-out single through the middle to break up the shutout bid.

Saunders Ramsey recorded the final out of the seventh and finished off the game with 2.2 innings of scoreless relief.

LSU did not record an extra-base hit and left 13 runners on base.