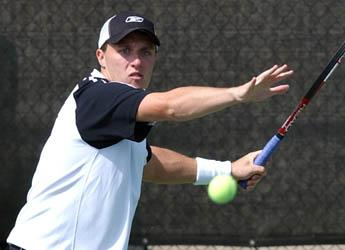 COLLEGE STATION, Texas — LSU’s Ken Skupski could not hold on to an early first-set lead as he was defeated by Virginia’s Rylan Rizza in two sets, 7-6 (7), 6-2, in the round of 64 singles competition of the men’s tennis NCAA Championships at Texas A&M’s George P. Mitchell Tennis Center on Wednesday.

Skupski and Rizza, ranked 36th and 33rd, respectively, fought back and forth the entire first set. Skupski took the lead at 5-3 and needed just one more game to win the first set.

Rizza went ahead 4-1 early in the tiebreaker. Skupski won a few points, but Rizza took the 6-4 match-point advantage. Skupski then fought back to make it 6-5 and then tied it at 6-6.

The two evened it again at 7-all, but Skupski did not win any more points in the tiebreaker. Rizza came out with a 9-7 tiebreaker victory and a 7-6 first-set victory.

The second set proved to be more in Rizza’s favor, as he went ahead 5-1 to begin it. Skupski only took one more game before Rizza claimed the next one to win the second set, 6-2.

Skupski is now eliminated from the singles portion of the tournament and will prepare for the doubles competition that begins Thursday.

He and partner Mark Growcott will face the Texas A&M duo of Brett Joelson and Ante Matijevic after the round of 32 singles play is completed Thursday.