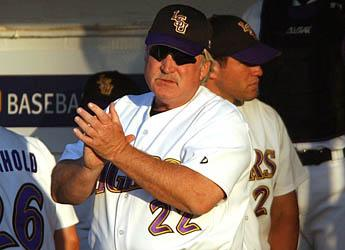 The game can be heard statewide on the LSU Sports Network (WDGL 98.1 FM in Baton Rouge). The radio broadcast and live stats are also available on the LSU Athletics web site, www.LSUsports.net.

The game will be televised regionally by Comcast Sports Southeast and the Jumbo Sports Network (Cable Ch. 13 in Baton Rouge).

“Number one, we are pretty healthy,” he explained. “We have progressively gotten better each weekend, even in the last weekend. All in all, we really haven’t played poorly all year, and then again we haven’t clicked on all cylinders but for only a few games this season. Hopefully, we can continue to progress at the right time of the year.”

LSU was in sixth place in the Western Division on April 15 with a 5-8 league record, but posted a 13-4 mark the rest of the way to finish at the top of the division standings with an 18-12 record.

Laval said senior left-hander Lane Mestepey (6-7, 4.71 ERA) will start Friday’s series opener for LSU. Mestepey is 2-0 in five previous appearances (three starts) against Mississippi State. In 26 career innings against the Bulldogs, Mestepey has allowed eight runs on 26 hits with one walk and 17 strikeouts.

Mestepey pitched in LSU’s 7-5 victory over the Bulldogs last Friday, allowing four runs on six hits in 5.2 innings with one walk and one strikeout. He was not involved in the decision, as the Tigers posted a three-run, eighth-inning rally to secure the win.

LSU shortstop Derek Hebert produced the game-winning hit in both of the Tigers’ victories at Mississippi State last weekend. Hebert’s two-out, two-run single in the eighth inning Friday erased a 5-4 deficit and led to LSU’s 7-5 win. Hebert’s solo homer in the sixth inning Sunday broke and 2-2 tie and proved to be the difference in the Tigers’ 3-2 victory that clinched the division championship. Hebert batted .400 (6-for-15) in four games last week with one triple, one homer, four RBI and five runs.

LSU left-handed relief ace Jason Determann was named SEC Pitcher of the Week Monday as he earned a win and a save last weekend at Mississippi State. He appeared in a total of three games last week, posting a 1.17 ERA in 7.2 innings as he allowed one run on eight hits with three walks and nine strikeouts.

After throwing 47 pitches on Friday, Determann returned to the mound on Sunday to register his seventh save of the season. He pitched the final 2.2 innings, allowing no runs on two hits with no walks and four strikeouts. Determann fanned the final two MSU batters with runners at second and first and one out with LSU clinging to a 3-2 lead.

For the entire season, Determann is 4-0 in 23 relief appearances with a 1.80 ERA and seven saves — in 50 innings, he has recorded eight walks and 59 strikeouts and opponents are batting just .238 against him.

Mississippi State leads the all-time series with LSU, 189-156-1. LSU holds a 11-9 advantage over MSU in the 20 meetings this decade. The Tigers have won seven of the last ninemeetings between the clubs.