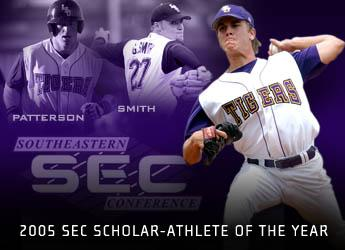 LaPorta and Hochevar lead a list of players named to the first and second-team All-SEC squads for this season. LaPorta led the SEC with 23 homeruns, while finishing second with 67 RBIs and a slugging percentage of .742. Hochevar collected a SEC-high 13 wins on the year, as well as leading the SEC in innings pitched (111.2) and strikeouts (123), while carrying a 1.93 ERA.

McMahon led the Gators to a 20-10 record in conference play and the outright SEC regular season title. Florida last won the SEC in 1998. As a freshman, Arencibia collected 78 hits while helping the Volunteers to a 18-11 conference mark. Determann had seven saves on the year, including a win and a save in last weekend’s division-clinching series at Mississippi State, where Determann was named SEC Pitcher of the Week for his efforts.

Coaches are not permitted to vote for their own players, thus a unanimous selection earns 11 of the 12 first-team votes. The complete 2005 All-SEC Team follows: