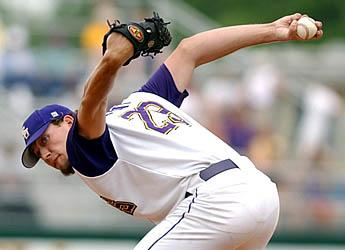 Jordan Faircloth, LSU
Faircloth was a volunteer speaker to children at local schools, served food at homeless shelters and was active in Habitat for Humanity, building homes for needy families. Faircloth also serves as an umpire at little league games and teaches in youth baseball clinics. He was a member of the 2004 SEC Academic Honor Roll and five-time member of the LSU Dean’s List. Faircloth is a member of Omicron Delta Kappa National Leadership Society, Phi Alpha Delta Pre-Law Society and the Fellowship of Christian Athletes.

Allen Rice, Alabama
Rice has logged over 70 hours of community service, while also being on UA Student Athlete Advisory Council for four years. He volunteered for over 40 hours at Holt Elementary School this spring, read books to kids at University Place, Maxwell, Vestavia and Oak Hill for Read Across America Day, read to local schools on Dr. Suess’ birthday, spoke to local schools about drug and alcohol awareness and the importance of staying in school and worked numerous baseball camps and vacations bible schools at local churches. He was a member of the 2004 SEC Good Works Team and won the UA Community Outreach Award for volunteering the most time than any other UA male athlete.

Scott Hode, Arkansas
Hode, a senior from Crystal Lake, Ill., has been a part of Arkansas’ Student Athlete Advisory Committee during his career with the Razorbacks, as well as spoke to several local middle schools on the dangers of drugs and alcohol. Hode, who is a physical education major, also signed autographs for the Boys and Girls Club.

Karl Amonite, Auburn
Amonite, a senior from Woodlsee, Ontario, worked at the Community Food Bank, as well as read to 5th Grade Students as a part of Auburn’s reading program. A exercise science major, Amonite also participated in the SAAC Clothing Drive. A first basemen for Auburn, Amonite was named to the 2005 NCBWA  Xanthus-Dick Howser Trophy Watch List.

Matt LaPorta, Florida
LaPorta works with children in the pediatric care unit at Shands Hospital…Served on the relief effort in his hometown following Hurricane Charley by cutting trees down and removing debris…Reads to elementary school kids at Terwilliger Elementary School…Mentors an underprivileged youth who has sickle-cell anemia.

Will Startup, Georgia
Startup was a volunteer reader at numerous schools, was involved in the Toys for Tots program and was active in the FCA as a speaker and member of its Leadership Team. He also served as a UGA representative at an NCAA Regional Leadership Conference. Startup won the 2005 Copas Leadership Award for the entire Georgia athletic program as the top student-athlete involved in community service and leadership.  A member of the Georgia SAAC, athletic and academic All-SEC teams, he was named a preseason All-American by Collegiate Baseball in 2005.

Jesse Barber, Kentucky
Barber is Kentucky’s representative on the Student-Athlete Advisory Committee and helped SAAC coordinate many events, including a food drive in the fall for the needy. He has spent time reading to elementary students at Clays Mill Elementary School and is a member of the Frank Ham Society of Character at UK for outstanding achievements in the classroom and the community.

Justin Brashear, Ole Miss
Brashear participated in “Bats & Balls” Baseball Clinics, which benefits underprivileged children. Also worked with other youth baseball clinics, Lafayette Middle School Career Day 2004, Oxford Food Pantry canned food drives and Reading with the Rebels.  Brashear and his teammates visit the St. Jude Children’s Hospital each spring, while he also is involved with the Toys for Tots program. He is a member of SAAC, where he has served as community service chair and officer. He is also a member of various SEC and Ole Miss academic honor rolls.

Saunders Ramsey, Mississippi State
Ramsey served as a keynote speaker for Disciple Now Youth Rally at First Baptist Church in Louisville, Miss., as well as a guest speaker for a student prayer breakfast at Starkville Academy. He is also a participant in Bully’s Book Blitz, a reading program at Ward-Stewart Elementary School and assisted with the MSU M-Club’s city-wide Thanksgiving canned food drive. In addition, he is active in the Starkville Habitat for Humanity organization, a volunteer instructor at the MSU Winter Youth Baseball Camps and baseball’s representative on MSU’s Student-Athlete Advisory Committee. Ramsey is a fifth-year senior and team co-captain.

Chris Howell, Tennessee
Howell visited patients at East Tennessee Children’s Hospital in the fall semester and visited Karns Middle School to honor academic achievers. In addition, he also participated in the annual National Student Athlete Day community service event know as April Play Day, which brings 400 Boys & Girls Club members to campus for a day of fun and games. He was also a volunteer instructor for Knox Country Parks and Recreation Baseball and Softball Clinic and served as a finish-line greeter for the 2003 and 2004 Buddy’s Race Against Cancer, as well as worked with the entire baseball team to organize a food drive to benefit a Scott County Food Pantry.

Jensen Lewis, Vanderbilt
Lewis was part of the baseball team’s annual Halloween Party at the Vanderbilt Children’s Hospital, where the team takes candy and toys to the children who are receiving treatment at the Outpatient Center. The team carves pumpkins and also plays games. He is also part of the Vanderbilt SAAC Christmas Party, where the student-athletes spend their own money to purchase  Christmas gifts for children from a kindergarten or first grade class at a local elementary school. He also participated in the annual Field Day where students from local elementary schools visit the VU campus and play games with the Vanderbilt athletes.