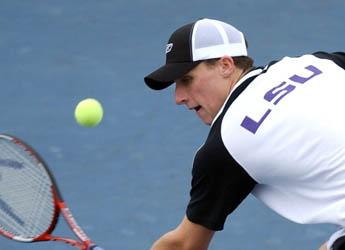 Brown led his team to a final record of 21-9, bringing them to a fifth Sweet 16 appearance in eight years. They were undefeated against all Louisiana opponents.

Skupski, a sophomore from Liverpool, England, received the Player of the Year award for his performance in both singles and doubles for the year. He notched a 24-13 record, including 11 wins over ranked opponents. He is set to compete in this week’s singles and doubles championships, currently ranked No. 36 individually and sixth as a duo with partner Growcott. He made the first-team All-SEC in both.

Growcott, also a native of England, was named the Newcomer of the Year after transferring to LSU for his junior season from Tyler Junior College in Tyler, Texas. He posted a 16-10 dual-match record this season in singles and lists at No. 79 by the ITA.

Joining Skupski and Growcott on the first team is sophomore Danny Bryan. Bryan went 18-5 in singles dual matches and was undefeated in 12 doubles dual matches with partner Colt Gaston.

Senior Jason Hazley rounds out the list with his selection to the second team. He concluded his LSU career with a 22-19 overall record his senior season, earning five wins over ranked opponents.

The 10th-ranked Tigers completed their season Saturday, falling to Georgia in the NCAA Tournament Sweet 16. That was the farthest any Louisiana School advanced this year.