World Class: Kelly Willie Wins On and Off the Track 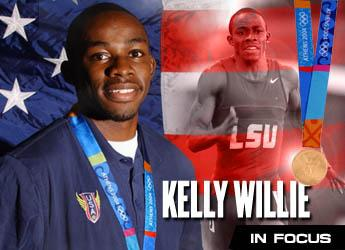 Kelly Willie is a junior from Houston, Texas with a passion for running and compassion in his heart. He began running track in the seventh grade and soon realized his unique talent: speed. Willie says he decided to come to Baton Rouge because of LSU’s nationally competitive track program among other reasons.

“Basically, I took a visit just like any other athlete. I liked the program and like the coaches. I knew that this was a place that would help my talents to flourish and where I could shine and show people what I’m capable of.”

This year, Willie began participating in the 60, 100 and 200 meter sprints for LSU in addition to his specialty, the 400 meter run. In a specialized sport such as track, taking on two extra events is no easy task, but Willie says he’s up for it.

“Adding the 100 and the 200 this year isn’t something new,” Willie said. “I ran those events in high school. People know me as a 400 runner because that’s what I do best. But don’t be mistaken and think that I can’t sprint. I don’t look at myself as just a quarter-miler, I look at myself as a runner who can compete in any event.”

Willie has found much success in purple and gold and attributes many of his achievements to LSU.

“Being here at LSU, I’ve grown so much as a runner and as a person,” he said. “I’m gaining life skills that will help me to achieve athletically and in the classroom as well.”

However, Willie’s success does not stop there. In 2004, Willie and teammate Bennie Brazell were invited to compete in the Olympic Games held in Athens, Greece. Not only did he participate, he won a gold medal as a member of the United States 4×400-meter relay team.

So now, at age 22, Willie seems to have conquered the track world. He has been named an All-American 11 times, won three national championships and an Olympic gold. But that is not everything. Willie is also performing well academically, majoring in communication studies and hopes to combine track with his education for his future successes.