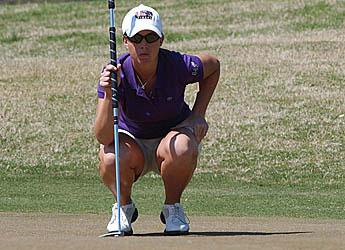 SUNRIVER, Ore. — LSU women’s golfer Brooke Shelton, on the heels of an impressive eighth-place finish this past week in the NCAA Division I Women’s Golf Championship was named an honorable mention All-American by the National Golf Coaches Association.

The honor was announced at the conclusion of the tournament at the group’s annual banquet at the Sunriver Resort, site of this year’s championship.

Shelton was one of two state college players on the All-American list as Allison Walshe of Tulane was named to the second team.

Shelton finished her season with a final stroke average of 74.89, the fifth best in the 26-year history of the program. Her four-year career average of 76.50 ranks as the seventh best in school history. Shelton also leaves her mark on the top in season (34) and career (116) rounds played and also her finish at the NCAA Tournament gave her six top 10s this season and her 12th top 10 at LSU, tying for ninth best in school history.

Shelton, from Plano, Texas, ironically will be returning to the state of Oregon next month where she will serve one of the internships awarded annually to student-athletes around the country by the Nike corporation, which is headquartered in Beaverton.