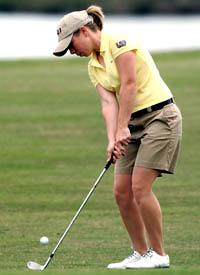 The Tulane women’s golf team played in the NCAA national championship tournament this past week while the Greenies sent both Thompson and Wheeler to the men’s regional tournament.

Thompson led the state in scoring with a 72.7 stroke average, was selected to the C-USA all-conference first team and was named a collegiate golf player of the week and won two tournaments.

Walshe was the C-USA player of the year, won the league title and posted a 73.45 stroke average. She ranked as high as 12th in the nation during the season and finished fourth in the NCAA east regionals.

Bass coached the Cajuns to a second place finish in the Sun Belt tournament and to four top five finishes during the year while Bower led the Lady Wave to their second straight C-USA title, to a fourth straight trip to the NCAA regionals and to a first ever berth in the NCAA championship tournament.

Collogan had three top 10 finishes and a 74.4 scoring average as a rookie for Louisiana-Monroe and Kuhn posted a 75.7 average and had two top 10 finishes as a freshman for LSU, including a second place finish at the LSU/Cleveland Golf Classic.