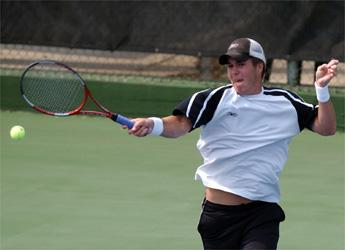 For the third straight Sweet 16 appearance the Tigers went home unable to advance to the Elite Eight. LSU finished its season with a 21-9 record.?

“We battled back in our second sets in singles, but Georgia was just too much for us today,” LSU head coach Jeff Brown said. “Their stars played like stars, especially at the top of the lineup.”

With the win, the Bulldogs (20-6) advance to the Elite Eight and will face Ole Miss, who beat Texas Tech on Saturday morning.

Georgia controlled the pace of the match early, ending LSU’s streak of 14 consecutive doubles point wins to start the match.

The No. 1-ranked duo in the country of John Isner and Antonio Ruiz of Georgia came out strong and grabbed an early lead on court one they would not relinquish. LSU’s sixth-ranked Mark Growcott and Ken Skupski dropped the match, 8-3.

Peter Richman and Jason Hazley fought back from an early deficit and had the match at 7-5 before they lost on court three to give the Bulldogs the first point. Danny Bryan and Colt Gaston led on court two, 7-5, when play was stopped.

“The No. 1 doubles team played like the No. 1 team in the country, and that put a lot of pressure on our Nos. 2 and 3 doubles teams,” Brown explained. “We probably would have won on court two, but Georgia’s No. 3 team came out firing as well.”

The Bulldogs carried their momentum to singles play, where they dominated on the majority of the courts in the first sets. They swept the first sets on all six courts, not allowing a score of closer than 6-4.

Isner dominated his second set as well on court one, handing Growcott the loss, 6-2, 6-0. The Bulldogs went up 2-0 with the court one victory.

“Having John win so quickly on court one was really big for us,” Georgia head coach Manuel Diaz said. “Knowing that we had won first sets on all six courts and only needed two more to win was huge.”

Second sets on the remaining courts looked very different, as the Tigers came roaring back and kept the scores a lot closer.

Georgia went up 3-0 after a win on court four by Colin Purcell over Richman. A questionable call midway through the second set went Georgia’s way, and Purcell stormed back after that taking the victory.

Bryan beat Ricardo Gonzalez in his second set, and Skupski and Gaston were both up in theirs about to win second sets, but that would not matter.

Hazley dropped his second set on court three to Matic Omerzel, 6-3. That was Georgia’s fourth and match-clinching point.

LSU is out of the team tournament, but both Skupski and Growcott will remain in College Station for the individual portion of the tournament later in the week. They will compete as a doubles team together and Skupski will compete in singles.