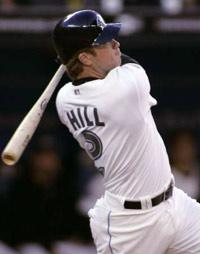 TORONTO — Former Tiger Aaron Hill made the most of his first shot at the big leagues, going 2-for-4 including a two-RBI triple in his first Major League Baseball at bat. Toronto beat the Washington Nationals, 6-1, on Friday.

Hill, who was called up from Triple-A Syracuse on Thursday to replace third baseman Corey Koskie, was the designated hitter and batted in the No. 8 position on Friday against the Nationals. His two-out, two-RBI three-bagger came as part of a five-run fourth inning off Washington’s Claudio Vargas.

“I wanted to just try and feel comfortable today,” Hill told MLB.com. “I wasn’t trying to get hits. I just wanted to get in there and breathe, see some pitches, be relaxed. “I was a little jumpy the first couple pitches, but I settled down and told myself to breathe. I felt better after my first at-bat.”

The shortstop earned his second hit of the game with a single in the ninth inning.

The 2003 All-American and Southeastern Conference Player of the Year began the 2005 season with successful stinit in his first Triple-A assignment, batting .301 with five homers and 18 RBIs in 38 games for the SkyChiefs. Hill played in four Spring Training games for the Blue Jays, going 2-for-10 with a pair of singles.

“It’s always nice to get that first one out of the way, and he got two of them,” said Blue Jays manager John Gibbons. “I know he feels good. He’s an awful confident kid, and we expect big things out of him. How good he’ll be, we don’t know. But we think we’ve got a good one.”

Toronto improved to 22-20 overall and plays the second of its three-game series with the Nationals at 3:07 p.m. CDT on Saturday.