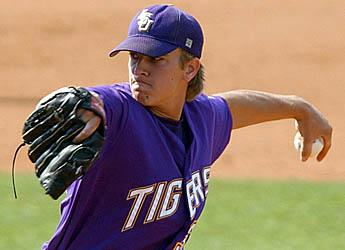 The Bulldogs held a 5-4 lead heading into the eighth inning Friday, but the Tigers rallied against relievers Brett Cleveland (2-1) and Mike Valentine.

Clay Harris led off the eighth with a single before Cleveland walked Jordan Mayer, forcing MSU coach Ron Polk to bring in Valentine from the bullpen.

Chris Jackson sacrificed the runners to second and third before Valentine fanned Matt Liuzza for the second out.

However, Hebert delivered a sharp single into center field to plate the go-ahead runs and give the Tigers a 6-5 advantage. Hebert then stole second base, moved to third on a throwing error by catcher Thomas Berkery and scored on Bruce Sprowl’s single up the middle.

Mississippi State threatened in the bottom of the eighth against LSU reliever Jason Determann (4-0). Joseph McCaskill and Jeff Butts began the inning with consecutive singles, but Determann struck out pinch hitter Daniel Tackett, who bunted foul with two strikes.

Jeffrey Rea grounded into a fielder’s choice and Determann got Ed Easley to bounce out to third to retire the side.

Determann retired the Bulldogs in order in the ninth to earn his fourth win in four decisions. He worked 3.1 innings in relief of starter Lane Mestepey, allowing one run on five hits with one walk and two strikeouts.

Mestepey, who pitched a no-hitter through the first four innings, worked 5.2 innings and surrendered four runs on six hits with one walk and one strikeout.

Cleveland was charged with his first loss of the season as he gave up two run on two hits in one inning with one walk.

The game was scoreless until the fifth inning as Mestepey and MSU starter Alan Johnson were locked in a pitchers’ duel.

Mississippi State touched Mestepey for two runs in the bottom of the fifth, and the Bulldogs scored two more in the sixth to take a 4-3 lead. McCaskill’s RBI single capped the sixth-inning rally and signaled Mestepey’s exit from the game.

LSU tied the game at 4-4 in the seventh when Sprowl scored from third base on a passed ball by Berkerey. But, the Bulldogs regained the lead in the bottom of the frame against Determann as Brad Corley’s sacrifice fly gave MSU a 5-4 advantage.