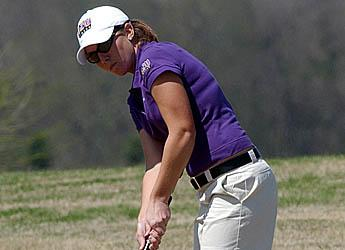 SUNRIVER, Ore. — LSU senior golfer Brooke Shelton became the fourth LSU women’s golfer to finish in the top 10 in the NCAA Division I Women’s Golf Championship Friday when she posted a final round of 73 and finished in a tie for eighth place.

Shelton posted her 12th career top 10 finish as she posted rounds of 71-75-72-73 for a 72-hole total of seven-over par 291 over the par 71 Meadows Course at Sunriver Resort. The event was the Plano, Texas native’s final tournament as a collegiate golfer and joined her with Katy Harris (2001), Meredith Duncan (2000) and Kristi Coats (1993) as the only LSU women to own top 10s in the NCAA championships.

Shelton continued on the final day what she had done for all but a five-hole stretch of the third round, play the course, take pars and move on. She was one over on the front nine with eight pars and just a bogey on the par 4, 405-yard third hole. On the back nine, Shelton bogeyed the par 11th for the third straight day and the 14th, going to three-over for the day and dropping out of the top 10 for the first time since the opening day of the event.

“I feel really good about what happened this week,” said Shelton afterwards of her first NCAA championship appearance which included national recognition and an article on Golfweek.com for her back-to-back pitching wedge eagles on par four holes Wednesday and Thursday. “It was weird walking up the 18th fairway knowing this was going to be my last hole in college golf. I bogeyed it, but that’s okay. That happens. It’s been a good week.”

“I’m very pleased with Brooke and how hard she worked to get to this point,” said LSU Coach Karen Bahnsen. “We are hopeful that her top 10 finish will get her honorable mention All-America honors.”

The All-America teams were to be announced late Friday night at the annual National Golf Coaches Association banquet at Sunriver.

Shelton was the first player to appear for LSU in the national championships since 2001 when LSU appeared as a team, the year Harris finished in third place.

In the team competition, Duke’s six-under par round on Thursday that gave the Blue Devils an eight-shot lead was too much for any of the teams to overcome as Duke coasted in on the final day with a 13-over 297 to finish 72-holes at 34-over 1,170. UCLA picked up four shots on the Devils with a nine-over round, but finished second at 39-over 1,175.