Men's Tennis Takes on Georgia at NCAA Round of 16 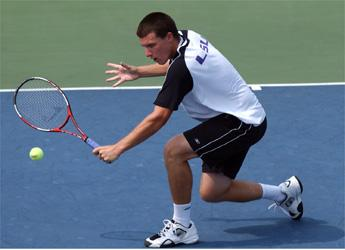 After defeating Binghamton and in-state rival Tulane in the first two rounds of the NCAA Tournament, the Tigers (21-8) are back in the Sweet 16 for the first time since 2001 and for the 19th time in program history. They are the tournament’s 11th seed.

“Having the opportunity to play in the Sweet 16 is getting more and more special with the parity that exists across the nation with so many teams that are so good,” head coach Jeff Brown said. “So we’re very proud of where we are, but we definitely have the goal to go even further.”

Georgia (19-6), the tournament’s No. 6 seed, is in the Sweet 16 after defeating both Winthrop and Clemson, 4-0, in the NCAA Tournament first and second rounds.

The Tigers faced Georgia once this season, falling by a 5-2 margin in Athens, Ga. The Bulldogs lead the all-time series, 38-17, and have won the last six meetings. The two teams have met twice in the NCAA Tournament, each claiming a win.

“I think Georgia and our team are very even,” Brown explained. “Both in doubles and singles we’re very alike. We both have top-ranked doubles teams and are solid throughout that lineup and then in singles we match up very well.”

LSU is anchored by its consistent doubles play, winners of 14 consecutive doubles points dating back to March 13. Ken Skupski and Mark Growcott rank sixth in the nation as a pair, and the tandem of Colt Gaston and Danny Bryan are undefeated in dual matches.

Georgia also has excelled at doubles this season, boasting the No. 1-ranked duo in the country in John Isner and Antonio Ruiz.

“We assume doubles is an important point every time we play it, and this match will be no different,” Brown said.

If the Tigers advance past Georgia, they will face the winner of the Ole Miss and Texas Tech match. It would be LSU’s first trip to the Elite Eight since 1999 and the program’s ninth overall.

“We’re proud of what we’ve done, but we’re also very hungry,” Brown said. “Our team is very hungry and I feel we can go further.”