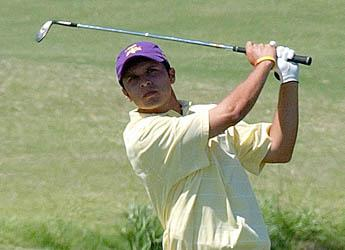 STANFORD, Calif. — The 30th-ranked LSU men’s golf team teed off under overcast skies Thursday and finished the first round of the NCAA West Regional at Stanford Golf Course in a tie for 15th place with a 14-over par 294.

Despite the presence of a light rain early in the day, players who teed off in the afternoon saw no rain with little wind. LSU head coach Greg Jones believes the scoring conditions in the afternoon allowed many players in the field to post some low scores.

“The ground was wet and the rough was high early in the day, which led to some high scores,” Jones said. “But as the day wore on, the conditions got better for scoring. It’s supposed to be nice the next couple of days, so the scores will come down a bit as the tournament progresses.”

Sophomore Chris Wells paced the Tigers by finishing the day tied for 12th place with an even-par 70. Senior Brandon Aydlett and freshman Beck Troutman follow closely behind in a tie for 34th place with each shooting a 2-over 72.

“In this situation in the postseason with a chance to go to the NCAA Championships, you can’t go 3-for-5, you have to go 4-for-5,” Jones said. “We had three guys play well, and they need to keep doing what they did, but we have to cut the other scores down.”

“We have a couple of kinks to work out, but we’re going to be right there within a few shots of the number (to qualify for the NCAA Championships),” Jones said. “We have to come out here tomorrow and put a number up and do it again the next day. We’ve got to go 4-for-5.”

Second-round action begins Friday at 9:12 a.m. CDT with LSU teeing off with Pepperdine and Washington beginning at 10:15. Live scoring for the second round will be provided by Golfstat.com and can be accessed through LSUsports.net.