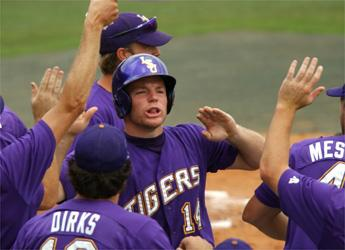 The games can be heard statewide on the LSU Sports Network (WDGL 98.1 FM in Baton Rouge). The radio broadcast and live stats are also available on the LSU Athletics web site, www.LSUsports.net.

Sunday’s game will be televised regionally by the Jumbo Sports Network (Cable Ch. 3 in Baton Rouge).

The Tigers have won 11 of their last 14 conference games and are in first place in the SEC Western Division with a 16-11 league record, one game ahead of Alabama and Ole Miss (both 15-12). LSU trails SEC East leader Florida (17-10) by just one game in the overall conference standings with one weekend remaining in the regular season. Tennessee (16-10), the second-place team in the East, has a 0.5 game edge over the Tigers in the overall race.

LSU, Florida and Tennessee have already clinched berths in next week’s eight-team SEC Tournament in Hoover, Ala. Eight teams are still alive for the final five berths — only Kentucky has been eliminated from SEC Tournament contention.

LSU has won 13 Southeastern Conference championships, most recently in 2003. The Tigers have captured 12 SEC Western Division titles, including three this decade (2000, 2001, 2003).

In 20.1 career innings against the Bulldogs, Mestepey has allowed four runs on 20 hits with no walks and 16 strikeouts.

Mississippi State is hitting .295 as a team with 26 home runs. LSU enters the series batting .293 with an SEC-best 71 homers.

The Bulldogs are led by outfielder Brad Corley, batting .324 with 3 homers and 31 RBI, and by infielder Thomas Berkery, hitting .318 with team-highs of seven homers and 51 RBI.

LSU outfielder Ryan Patterson enters the series batting a team-high .395 (83-for-210) with 20 doubles, two triples, 19 homers and 49 RBI. Patterson was named SEC Player of the Week on Monday after leading the Tigers to a series victory over Tennessee. He hit .636 (7-for-11) in three games with one double, two homers, five RBI and six runs scored.

Dirks earned his third complete-game victory this season, scattering 10 hits and limiting the Vols to three runs with no walks and five strikeouts. Smith posted a victory for the fifth straight weekend, worked six shutout innings against the Volunteers, scattering six hits with one walk and four strikeouts. Smith has allowed just two earned runs in his last 38.2 innings.

Mississippi State leads the all-time series with LSU, 188-154-1. LSU holds a 9-8 advantage over MSU in the 17 meetings this decade. The Tigers have won five of the last six meetings between the clubs, including a 2-1 series victory in Baton Rouge last season.