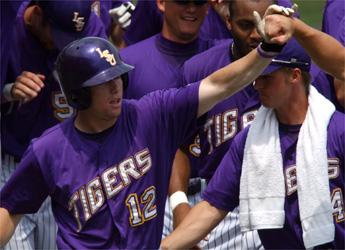 HATTIESBURG, Miss. — The National Collegiate Baseball Writers Association, working in conjunction with the St. Petersburg Area Chamber of Commerce, has released the list of 16 semifinalists for the Xanthus-Dick Howser Trophy, given to the top player in collegiate baseball.  The membership of the NCBWA will choose the Xanthus-Dick Howser Trophy based on three rounds of voting. The 2005 winner will announced at the College World Series in Omaha on Friday, June 17 at 10:00 a.m. CDT.

The Dick Howser Trophy, given in memory of the former Florida State University All-America shortstop and major league player and manager who died of brain cancer in 1987, is regarded by many as college baseball’s most prestigious award.

Criteria for consideration for the trophy include performance on the field, leadership, moral character and courage, qualities that were exemplified by Dick Howser’s life.

A Florida native, Howser was twice an All-America shortstop at Florida State University (1957-58), then coached the Seminoles in 1979 after a career as a major league player and coach. After one year in the college ranks, Howser returned to the majors to manage the New York Yankees and Kansas City Royals and won the World Series with the Royals in 1985. The baseball stadium on the Florida State campus is named for Howser.

The winner’s name is inscribed on the permanent trophy, a bronze bust of Howser permanently displayed at Tropicana Field in St. Petersburg, home of the Tampa Bay Devil Rays and the 1999 NCAA Men’s Basketball Final Four. Both the winner and his school receive a special trophy to keep.

The St. Petersburg Area Chamber of Commerce is in its 105th year of existence in 2004. The organization has long been a vital force in the baseball affairs of the city, both in spring training and during the pursuit of a major league baseball franchise for the Tampa Bay area, and continues its solid role in the 21st Century.

NCBWA membership includes writers, broadcasters and publicists. Designed to promote and publicize college baseball, it is the sport’s only college media-related organization, founded in 1962.

Xanthus Higher Education is a progressive, multi-faceted organization that endeavors to assist institutions of higher learning in all aspects of educational debt management, including assisting with student loan allocation and debt consolidation.  This is accomplished through the development of strategic alliances and partnerships with selected organizations throughout the United States.  Launched in 2002, Xanthus Higher Education is headquartered in St. Petersburg, Fla.