Shelton Tied for Fourth at NCAA's Entering Final Round 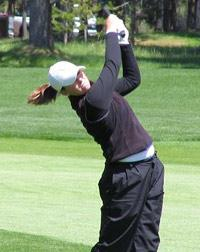 SUNRIVER, Ore. — LSU senior golfer Brooke Shelton chipped in for an eagle on a par-4 hole for the second straight day to highlight a 1-over round of 72 in the third round of the 2005 NCAA Division I Women’s Golf Championship Thursday at the Meadows Course at the Sunriver Resort.

Shelton after three rounds stands at 5-over par 218 as she moved from a tie for ninth to a tie for fourth five shots from the lead entering the final round on Friday. She will be trying to become the fourth LSU golfer to record a top-10 finish in the NCAA Women’s Championships joining Katy Harris (3rd in 2001), Meredith Duncan (7th in 2000 at Sunriver) and Kristi Coats (3rd in 1991). It will be Shelton’s final round of her four-year career at LSU and she will go for her 12th career top-10 finish.

Shelton got off to a good start in the morning wave after bogeying the par-3 (146-yard) fourth hole, she came right back on the 356-yard par 4 fifth and hit one in the hole with her pitching wedge for the second straight round.

“(Wednesday) I was in the rough, like from 120. I hit it really good. It was with a pitching wedge,” said Shelton after play on Thursday. “(Thursday) is was the same club, but not such a good shot. It clanked the pin and went in. It was about the same distance, maybe 118.”

Shelton also birdied the par-4 ninth hole (362) to turn at 2-under 33, putting her at 2-over for the tournament and tied with four golfers still to tee off for the lead.

But on the back nine, a part of the course she played in 1-under over the first two days, she struggled bogeying five holes in a seven hole stretch in which she also had birdies at the 163-yard 13th hole and the 490-yard 17th hole (par 5) which allowed her to get in at 1-over par.

“It got a little tight on the back nine,” said LSU Coach Karen Bahnsen. “But Brooke handled herself very well. I’m really proud of her.”

“I played well on the front, but got really frustrated on the back,” said Shelton, from Plano, Texas. “I didn’t hit a lot of fairways.”

Shelton stands five shots out of the lead as the team and individual competitors were the victims of favorite Duke’s impressive 6-under performance as a team that vaulted them past everyone to the team lead at 21-over par (873), eight shots better than second-round leader Auburn now at 29-over par (881). The SEC Champions opened the day nine shots ahead of Duke.

The other three SEC teams are all in position for a top 10 finish with Arkansas in sixth place at 44-over 896, with Tennessee tied for ninth at 901 and Florida tied for 11th at 902.

The final round of the 72-hole championships will be seen on The Golf Channel (Cox Digital Cable 250 in Baton Rouge) at midnight. Live scoring for the event can be found at www.golfstat.com.