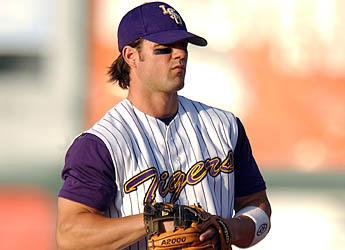 The Tigers (36-17) won their first extra-inning game of the season and improved to 7-4 in mid-week contests. The Privateers dropped to 17-35 overall and have lost 15 of the last 16 meetings to their in-state foe.??

LSU concludes the regular season with a pivotal three-game series at Mississippi State this weekend. The Tigers lead the SEC Western Division with a 16-11-league record, one game ahead of Alabama and Ole Miss.

Stavinoha’s game-winning sac fly capped a four-RBI night for the senior. Stavinoha connected on his 17th homer of the season — a three-run shot in the fifth — and extended his hitting streak to a career-high 12 games. Derek Hebert added three hits and scored two runs.

Both teams were presented with numerous scoring chances in the extra frames but neither could find a timely hit until LSU took advantage of its opportunity in the 13th.

Hebert singled to start the 13th and was followed by Bruce Sprowl, who reached on a throwing error by the catcher Alex Webster. Blake Gill was able to move the runners over with a groundout. Two batters later, Stavinoha drove in Hebert with a bases loaded sac fly. Harris immediately scored Sprowl on his single. Both runs proved to be unearned.

Dardar plunked Jason Schwab on the first pitch of the game, followed by back-to-back walks to Brandon Bowser and Michael Epping.

Trailing 3-0, Dardar labored into the second and allowed two more walks, which ended his evening. Edgar Ramirez entered and avoided trouble with a pair of strikeouts to retire the side.

Ramirez, who pitched in the ballpark two years ago as a member of Florida International, fired 2.2 scoreless innings of relief and registered a season-high five strikeouts.

UNO starter Nick Augustavo was equally effective through the first four innings. The freshman yielded his first hit with two outs in the fourth but at the cost of a run. Clay Harris crushed a solo homer — his first in 14 games — to get the Tigers on the board at 3-1.

Hebert sparked LSU to the four-run fifth with his one-out triple to the right field wall. Sprowl’s fielder’s choice RBI brought the Tigers to within a run at 3-2. After a Gill single and a Patterson fly-out, Stavinoha inherited a two-out situation with a pair of runners in scoring position.

Stavinoha hammered a three-run blast into the night, putting LSU in front at 5-3 and chasing Augustavo from the game.

Freshman Eric English relieved Ramirez in the fifth and faced the minimum through his first two frames, including striking out the side in the sixth. But in the seventh, UNO rallied for two runs on a RBI groundout by Paul Smyth and clutch single from Alex Webster.

The Tigers let a golden opportunity slip away in the eighth. Jordan Mayer and Chris Jackson reached base to start the inning and were sacrificed over by Matt Liuzza. Neither Hebert nor Sprowl could bring the lead runner home as both fanned in order.

Liuzza looked to have given LSU the lead with one out in the top of the 10th on a base hit to left, but Clay Harris was thrown out at home on a perfect throw from left fielder Josh Jones. Hebert then grounded out to relief pitcher Bryan Cryer to retire the side.

Jason Determann, the Tigers’ fifth pitcher of the night, escaped trouble as well in the home half of the 10th. The crafty southpaw pitched around a leadoff triple to keep LSU’s hopes alive.

Both teams combined to strand 31 runners on the night, including 12 left in scoring position by UNO.