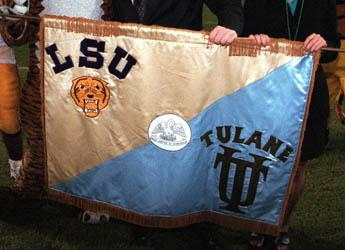 BATON ROUGE – In a renewal of one of the most historic college football matchups in the South, LSU and Tulane have agreed to play a 10-year home-and-home football series beginning in 2006.

“This agreement gives us an annual non-conference game with great historical significance, around which we can plan the rest of our scheduling for the next decade,” said LSU athletics director Skip Bertman. “It also gives us the opportunity to take the Tigers to our fans in New Orleans every other year.”

The negotiations for the LSU-Tulane series began in January. Now, with the recent decision of the NCAA to add a 12th game to the regular season schedule each year beginning in 2006, LSU will have three non-conference games to schedule on a yearly basis in addition to Tulane.

“I am very enthusiastic about this opportunity to bring the Tulane game back to the LSU schedule,” said LSU Chancellor Sean O’Keefe. “There is a tremendous amount of history and tradition wrapped up in this game for the fans of both schools. I have spoken with Tulane president Scott Cowen and both institutions share in the excitement for renewing this series.”

The agreement calls for LSU to retain and sell an allotment of tickets for those games that are played in the Louisiana Superdome, giving LSU revenue that substantially offsets the loss of a home playing date in the years the Tigers visit Tulane. Tulane will receive a financial guarantee and the option to purchase tickets.

“Our next step in the scheduling process is to address the 12th game on our schedule,” Bertman said. “Because of the ticket sharing plan in the Superdome, this long-term agreement with Tulane does not preclude us in coming years from pursuing other attractive intersectional games.”

LSU and Tulane met for the first time in 1893, the first intercollegiate football game for both schools. In the ensuing years, the LSU-Tulane game became one of the most enduring football series in all of college football.

The teams met periodically in the early years of their existence, then began to meet regularly in 1911, playing every year until 1994, except for a one-year interruption in 1918 due to World War I. The 76 consecutive games from 1919 to 1994 is still the 24th longest uninterrupted series in NCAA Division I history.

In all, LSU and Tulane have met 94 times. LSU leads the series 65-22-7 according to LSU, but Tulane records show LSU leading 64-23-7. The disputed game was in 1901 when Tulane won on the field, 22-0, but the game was forfeited to LSU by the Southern Intercollegiate Athletic Association when it was ruled that Tulane fielded an ineligible player.

There are many great traditions and legends associated with the LSU-Tulane series, including the ceremonial exchange of “The Rag,” a rectangular flag with the colors of blue (for Tulane) and purple (for LSU) bearing the seal of Louisiana, which goes to the annual winning team.

Tulane enjoyed its greatest success against the Tigers between 1920 and 1940 when the Green Wave won 12 of 20 games, including LSU’s first game in Tiger Stadium in 1924. The tide of success turned LSU’s way beginning in 1949 when the Tigers upset an undefeated and 10th-ranked Tulane team, 21-0, in Tulane Stadium. Oddly enough, LSU students had broken in the previous night and painted “21-0” on the ramps of the stadium.

After that 1949 game, LSU would not lose to Tulane again until 1972. That streak included two ties, but also saw the Tigers beat the Green Wave by an identical score of 62-0 on three different occasions. In the following years, LSU won every game except for a three-out-of-four year stretch from 1979-82.

Under the new contract, LSU and Tulane will meet each season for 10 years, beginning on September 23, 2006 in Tiger Stadium and alternating sites each year through the final game of the agreement on October 31, 2015, in the Superdome.