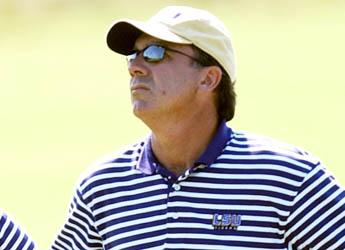 BATON ROUGE – The 30th-ranked LSU men’s golf team is set to compete in the postseason for the second consecutive year as it prepares for the 2005 NCAA West Regional this weekend at Stanford Golf Course in Palo Alto, Calif. The course will play to a par 71 and 6,742 yards for the championship.

This marks the fourth NCAA Regional appearance for LSU in the Greg Jones era as the Tigers will play as the No. 11 seed in the 27-team field. The top 10 teams and top two individuals not among the top 10 teams will advance to compete in the 2004 NCAA Division I Men’s Golf Championship, June 1-3, in Baltimore, Md.

“We’re playing well and we’re focusing on the task at hand,” Jones said. “We have to figure out this golf course in our practice round and get our numbers on the board low enough to advance. That’s what we’re going to do, and that’s what each player is here to do.”

Jones will play with a lineup of senior Brandon Aydlett, sophomores Chris Wells and Garrett Runion, and freshmen Brent Struthers and Beck Troutman. Wells is making his 12th tournament appearance of the season, while Troutman and Runion are making their 10th and Aydlett and Struthers are making their sixth.

Runion is the only Tiger to compete in an NCAA Regional during his career, finishing in a tie for 74th in the NCAA East Regional at the Course at Yale in New Haven, Conn., last season.

“It’s going to be exciting for those other guys,” Jones said. “We’ve played tough courses in tough conditions with tough fields all year long, so it shouldn’t be a shock to them. This is what we’ve prepared for. This group just has to continue doing what it’s been taught and play the golf course.”

Wells earned Second-Team All-SEC honors for the first time in his career May 2 and leads the team with a 72.78 stroke average in 33 rounds, including 13 rounds of par or better, and is tied for third in the SEC with six top-10 finishes.

Troutman is third on the team with a 73.92 stroke average in 27 rounds, including 11 rounds of par or better, and earned the team’s best finish of the season by claiming medalist honors at the LSU Spring Invitational on April 3. He also has two top-20 finishes to his credit.

The Tigers are ranked No. 1 in the nation in driving accuracy this season with 78.1 percent of fairways hit, while Auburn follows closely behind with 76.4 percent. Jones believes that his team’s ability to put the ball in the fairway will give LSU an advantage over other teams in the field.

LSU is looking to advance to the NCAA Championships for the first time 1997. The Tigers missed a spot in the tournament last season by a single stroke when the team finished in a tie for 12th in the East Regional, which is LSU’s best finish in an NCAA Regional under Jones.

Tee times for the tournament begin at 9:12 a.m. CDT with LSU teeing off with Pepperdine and Washington beginning at 2:15. Live scoring will be provided by Golfstat.com and can be accessed through LSUsports.net.