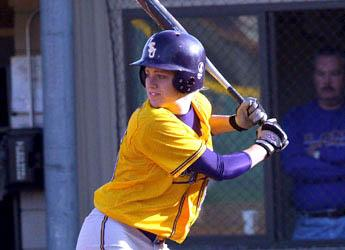 The Louisiana Hitter of the Week on March 9, Castle tied for the team lead in batting average at .367 and led the Tigers in hits this season with 62. The Purple and Gold Challenge Most Valuable Player also ranked sixth in the SEC in doubles. Against Mississippi State, she broke the LSU single-game record for hits with a 5-for-5 performance at the plate. In addition, she tied the single-game record for runs scored with four.

A native of Lafayette, Castle tied for the team lead with 19 multiple-hit games and also recorded six multiple-RBI games on the season. She also tied for the second-best overall hitting streak on the team at eight games.

A second-team All-Southeastern Conference selection, Harris was a member of the USA Softball Player of the Year Watch List. Along with a .338 batting average and seven home runs, she broke the LSU single season record, leads the SEC and ranks ninth in the NCAA in hit by pitches this year.

With 21 stolen bases, the Hendersonville, Tenn., native also tied for the team lead in stolen bases and ranked in the top 10 in the SEC in on base percentage, runs scored, walks and stolen bases. She recorded 13 multiple-hit games and three multiple-RBI games on the year. At South Carolina earlier in the year, she knocked in the game-winning run on a solo home run in the top of the eighth inning.

Both players will now advance to the national ballot for the opportunity to be named to the NFCA All-America team. The All-America team will be determined on May 30 and announced prior to the start of the Women’s College World Series in the first week of June.