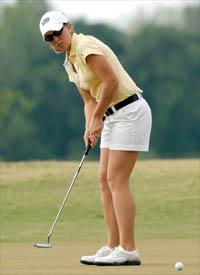 SUNRIVER, Ore. — LSU senior Brooke Shelton played her first round in an NCAA Division I Women’s Golf Championship Tuesday like an NCAA Tournament veteran rather than stepping off the tee in the championship event for the very first time.

Shelton consistently handled the par 71 Meadows Course at the Sunriver Resort posting an even par round to stand in a tie for third after the first round of the 72-hole event.

Shelton, who qualified as one of the two individuals from the NCAA Central Regional after the LSU team failed to make the top eight, was in the first group of three individual players off the 10th tee at 9 a.m. Pacific Daylight Time and when she finished a little after 1:30 p.m. PDT, it would still be another six hours before she would know her position in the standings.

Shelton birdied the par four 15th hole, 371 yards, and then bogeyed the third toughest hole of the day, the 392-yard par 4 first. Other than that, she posted 16 pars including streaks of five and eight consecutive to put up a score that everyone had to look at early in the day, especially the members of the 12 teams playing in the afternoon wave.

Only two players player, Carolina Liano of Pepperdine and Dewi Schreefel of Southern California, was able to go under par on the first day, played in cloudy, 55-degree weather. Liano had four birdies to offset two bogeys and finished at two-under 69. Liano and Schreefel, who shot 70, played in the final group of the day that completed 18 just before darkness set in.

In the team competition, Southern California and UCLA are tied for the lead at four-over par 288. UCLA is considered one of the favorites in the team event along with Duke, which is in a tie for fifth after 18 holes at 292, eight over.

Ironically, Shelton after having the first tee time on Tuesday, will have the last on Friday at 3 p.m. PDT (5 p.m. Baton Rouge time), meaning between her last putt of the first round and the start of her second round, some 25 1/2 hours will have elapsed.

Highlights of the second round will be seen on a tape-delayed basis at midnight on The Golf Channel (Digital Cable 250 in Baton Rouge). Live scoring of the event can be found at www.golfstat.com.