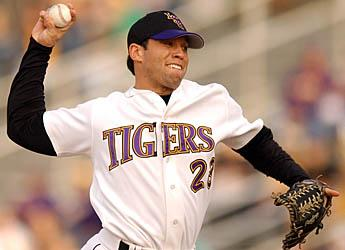 BATON ROUGE, La. – Ninth-ranked LSU (35-17) begins a four-game road swing at 6:30 p.m. Wednesday as the Tigers face the University of New Orleans (16-34) at Maestri Field. The road stretch continues this weekend when the Tigers conclude the regular season with a three-game SEC series at Mississippi State.

The LSU-UNO game can be heard on the LSU Sports Network (98.1 FM in Baton Rouge) and on the Internet at www.LSUsports.net. The game was originally scheduled to be played on March 15; however, inclement weather forced the contest to be postponed and re-scheduled for Wednesday.

LSU won its fifth straight SEC series last weekend, capturing two of three games versus # 9 Tennessee. LSU improved its record to 13-8 when facing a team ranked in the Top 25.

The Tigers have won 11 of their last 14 conference games and are in first place in the SEC Western Division with a 16-11 league record, one game ahead of Alabama and Ole Miss.

LSU trails SEC East leader Florida (17-10) by just one game in the overall conference standings with one weekend remaining in the regular season.

LSU senior outfielder Ryan Patterson was named SEC Player of the Week on Monday, as he led the Tigers to the series victory over Tennessee. Patterson hit .636 (7-for-11) in three games with one double, two homers, five RBI and six runs scored.

LSU coach Smoke Laval will send junior right-hander Chase Dardar (1-0) to the mound on Wednesday. Dardar, a transfer from Delgado Community College in New Orleans, will make his second career LSU start and his first appearance on the mound since March 29, when he also pitched against UNO.

Dardar worked one scoreless relief inning against the Privateers, recording one walk and one strikeout in an 18-10 LSU victory.

UNO coach Tom Walker is expected to counter with freshman right-hander Nick Augustavo (3-0). Augustavo worked one relief inning in the March 29 contest, allowing one run on one hit with no walks or strikeouts.

Laval has a 6-1 career mark against UNO during his four seasons as LSU’s coach.