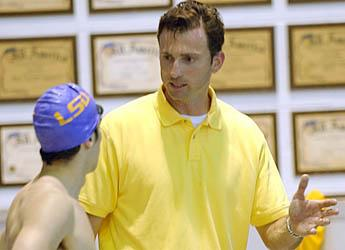 Schmitt hauled in eight men, including one diver and announced the signing of 11 women, featuring two divers.

“We are excited about the new energy that these athletes will bring to the program,” said Schmitt. “This is a positive step in where the future of the program is going.”

Schmitt praised the efforts of his entire coaching staff, which brought in a class that should benefit the program for the next several years.

“The whole staff contributed to this class,” added Schmitt. “They worked really hard in bringing quality athletes to the program.”

The Tigers were able to bring in one of the top freestyle swimmers in the state of Kentucky as well. Justin Corvin, a native of Lexington, Ky., was the 2004 state champion in the 50 freestyle and finished runner-up in the same event in 2005. Corvin is also a record holder in the 200 free for the Wildcat Aquatic Club coached by John Brucato.

Roy Chambers and Chris White bring quality depth to LSU’s breaststroke efforts. Chamber, who also competes in the freestyle, was a team leader on the Laser Swim Team in Little Rock, Ark. Chambers has emerged as a rising talent in the region under coaches Tay Stratton and Matt Twillie. White, a native of Greenville, S.C., was a member of Team Greenville under head coach Scott Bonine.

Will Benge, a native of Nashville, Tenn., is a state finalist in the butterfly and a product of the Nashville Aquatic Club. Benge trained under John Morse.

Connor Farber is one of three prospects signed from the state of Texas. Farber, a native of Sugarland, was a school record holder, state finalist and the Houston-Metro champion in the 100 butterfly.

Angela Jurma hails from Bedford, Texas and comes to LSU after competing with the Grapevine-Colleyville Aquatics Team under head coach Pete Salvan. Jurma is a school record holder in the 50 and 100 freestyle events at Trinity High School.

Sarah Bedell and Jamie Wright were local club swimmers in Baton Rouge. Bedell is the current state champion in several breaststroke events as a member of Crawfish Aquatics. Bedell trained under head coach Jimmy Roberts. Wright was an active swimmer under John Roy for the Bengal Tiger Aquatic Club. Under Roy, Wright became a Junior National qualifier and multi-time state finalist in the freestyle, butterfly and breaststroke events.

Berit Aljand rounds out the international signees and is a native of Estonia. Aljand is a national caliber breaststroker who will lend  immediate help to the Lady Tigers.

Two swimmers will attend LSU after successful high school and club careers in the talented state of Florida. Sabrina Messmer, a native of Daytona Beach, Fla., was recently named the Volusia/Flagler Counties Female Swimmer of the Year. Messmer will bring experience in freestyle events after swimming under head coach Steve Lochte at the Daytona Beach Swim Club.

Katherine Noland, a native of Fort Lauderdale, Fla., is the state champion in the 100 butterfly and runner up in the 50 freestyle. Norland was also a standout club swimmer under Duffy Dillon at Fort Lauderdale Aquatics.

Schmitt also announced the signing of two prospects from the state of Alabama. Katie Gilmore of Daphne, Ala. is the high school state champion in the 50 freestyle. Gilmore prepped at the Baldwin Mobile Aquatic Club.

Lauren Simons also hails from the Mobile area and competed for the city’s swim association under head coach Tom Herder. Simons was a member of the All-American 200 freestyle relay at Saint Paul’s Episcopal High School.